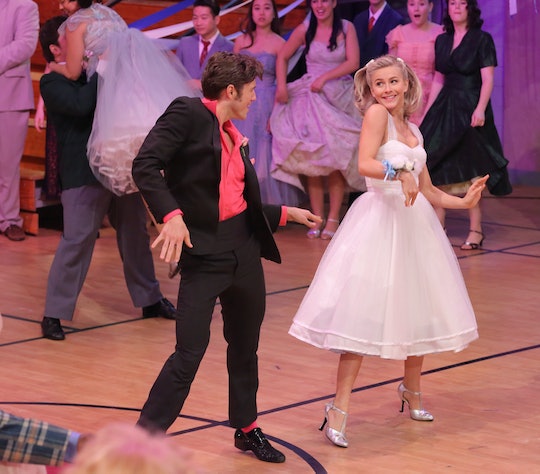 OK, Rydell High, you ready for this? On Sunday night FOX transported us all back to high school, where it all went down for Danny, Sandy, the T-Birds, and the Pink Ladies, and if I'm honest, Sunday night's airing was especially difficult for me to watch, given the fact that I count Jeff Conaway's take on the original Kenickie as the defining sexual awakening of my youth. But even though I've got tons to say on the matter — I am not alone in wanting a hickey from Kenickie so y'all can just go ahead and stop lying to yourselves — no one had more feelings on seeing the squad (are we still using that word?) back together on screen than Twitter. The funniest Twitter reactions to Grease: Live! served as the barometer for the show's success, and the tweets prove that no matter how much time has passed, we all still wish we were at Rydell High.

I don't care how fantastical the flying car in the original 1978 film was, and you can say what you will about John Travolta, but the film will live on forever for me as perfect. Even after all these years, just the mere mention of the "K" in "Kenickie" is enough for me to need to excuse myself from the table, so you better believe I took my watching and reacting very seriously. Though no one will ever quite capture my heart the way Conaway did — he was the first bad boy I ever truly loved, and yes, this article is actually a rouse for me to talk about my inappropriate feelings for a fictional movie character — Carly Rae Jepsen told Entertainment Weekly that the live musical would have its differences from the '78 movie: "We’re paying homage to the film, but this isn’t a remake. It’s a completely new version."

Because Twitter is a melting pot for nonstop feelings — and a true gift to us all — fans and haters very pointedly described the ways in which those differences landed for audiences. Was Grease: Live! the magic we all hoped it'd be? Was it a disaster? Here's what viewers had to say:

Adjusting To The Stage Didn't Go Over So Well

Sandy's From Australia, Not, Uh, Utah

And Then There Were Some Especially Funny Comments

The Internet Was *Here* For The Costumes

It Only Took A Few Decades, But We Finally Got The Jokes

TBH, 'Grease: Live!' Got The Most Important Thing Right

Are We Watching 'Grease: Live!' Or 'Inception'?

'Grease: Live!' Literally Resulted In A House Divided For Some

'Grease: Live!' Had No Chill, And Neither Did We

Insert *praise hands* emoji for Twitter tonight, guys, 'cause it was the real MVP.