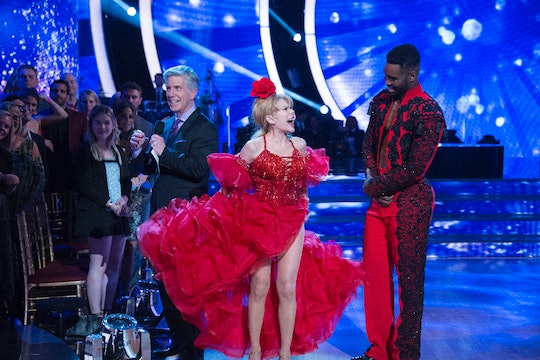 From recent Bachelor alum Nick Viall to Olympian Simone Biles (and every celeb in-between), the cast of the most recent season of Dancing with the Stars is certainly eclectic (to say the least). But perhaps no other contestant has riled fans up as much in recent memory as the one and only Charo, the Spanish-American actress, comedian, and flamenco guitarist paired with DWTS pro Keo Motsepe on Season 24. The abundance of funny Charo tweets on Dancing with the Stars this time around definitely prove how much fans are loving her antics.

At 66, Charo is the oldest contestant appearing on this season of the long-running dancing competition show and her participation is impressive in its own right — I mean, she's got better moves than a lot of 20-somethings I've seen on a dance floor, at least. And she's certainly in better physical condition than many I know. "I used to run about two miles every day, but now with ‘Dancing With the Stars’ the running is over," Charo told New York Post of dropping her old exercise regimen and replacing it with the show's notoriously grueling training schedule.

While long-time fans of DWTS are no strangers to feisty (or straight up annoyed) contestants talking back to the judges when they don't like the feedback or scores they've received, Charo's fiery attitude in the mere two episodes since the season's debut has been on another level entirely. She's been clapping back loud at Bruno Tonioli in particular, leading to her dancing partner having to physically hold her back from apparently fighting the judge who offered her some critical feedback for her recent paso doble.

Needless to say, fans are seriously amused and loving Charo's ratings-grabbing antics, if their love for her all across Twitter is any indication.

According to an E! News source, nothing about Charo's feud with Tonioli is fake, and she's even threatening to quit the show altogether over what she feels is unfair judging: "Charo was super upset this week about her scoring and she feels like she's being treated and scored very unfairly [...] She is seriously upset."

I think it's safe to say that viewers are all thanking their lucky stars that Charo ended up remaining safe after she was in the bottom two along with Chris Kattan on the most recent episode and hoping that she sticks around as long as she possibly can. Praise the almighty Mirror Ball that the pop culture icon gets to live to cha-cha (and "cuchi cuchi") on another day.