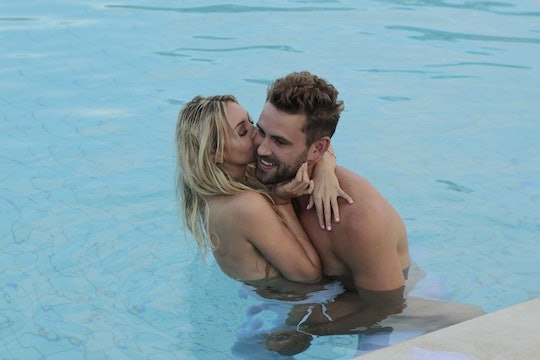 These Tweets About Corinne Will Give You Life

There's no denying that Corinne is a polarizing presence on this season of The Bachelor. Everyone seems to be divided into two teams, viewers and cast members alike: some people can't stand Corinne's aggressive spotlight-seeking behavior, but others love the LOLs she brings to the show. While the other women in the Bachelor mansion are thin on patience when it comes to Corinne, Nick loves how fun and playful she is. Similarly, some audience members can't wait until the day her roses run out, while others find Corinne hilarious. These funny tweets about Corinne from The Bachelor capture the full range of reactions when it comes to this unique contestant.

Most people can probably agree that Corinne is entertaining, even if she's not their favorite contestant in the house. She certainly makes the most of her screen time. Every episode seems to result in Corinne coining a new ridiculous phrase or causing another stir; she can whip the other women in the house into a frenzy by barely doing anything at all. The simple act of taking a nap is enough for Corinne to inspire a buzz of frustrated gossip. There's seemingly nothing Corinne can do without getting the attention she craves, which makes her an amusing diversion — whether you like her or not.

She's An Expert In The Field

There's nothing Corinne doesn't know about napping. She knows all about its historical significance (Abraham Lincoln took naps, too!) and she could probably offer some tips on technique (nap with a rose for added elegance and romance).

Corinne Is So Relatable

Corinne's menu lacks spice, but at least it's all easy to make. Her favorite dishes are perfect for anyone who doesn't like spending a lot of time in the kitchen. If you can pass on the recipes to your own nanny, even better.

A Legacy Of Greatness

If Corinne brings those chicken nuggets to the next rose ceremony, then there's going to be some serious competition on hand.

It's hard to pick on Corinne for not knowing how to wash a spoon when everyone has been victim to spoon splash-back at least once.

A Legacy Of... Something

Corinne is like a Bach Transformer: she takes bits and pieces from past controversial contestants and melds them together until she becomes Megatron Corinne. (Does it sounds like I know anything about Transformers? Because I don't.)

It All Makes Sense

Finally, an explanation! Corinne wasn't rudely skipping out on the rose ceremony so she could get some extra Z's; she just didn't want to stay up past her bedtime.

It'll Be A Long Wait

The other women in the house were just waiting for an opportunity to hold a roast for Corinne.

It's Important To Be Well-Rested

Corinne becomes a lot more likable when you realized her outlook on sleeping (i.e., doing it as much as possible) is actually #goals.

Corinne may be causing drama in the house, but at least she provides endless material for tweets.