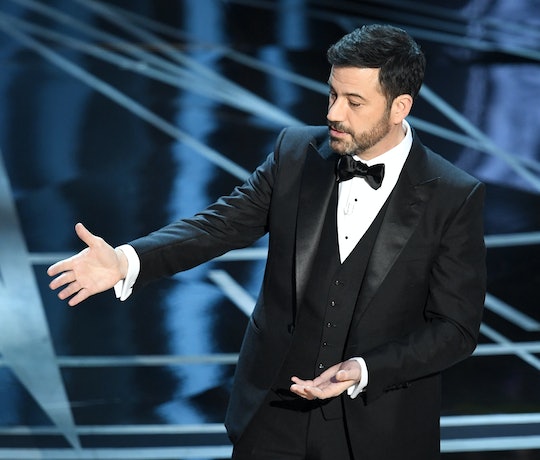 Because Jimmy Kimmel is a man of the people, as the host of the Oscars he decided to bring a group of bemused tourists in to the Oscars to shake hands with the celebrities sitting in the front row and take pictures on their iPhones. It was delightful. Particularly one man named Gary and his fiancée, which sent social media into overdrive and inspired funny Gary tweets and memes from the 2017 Oscars that prove Gary is all of us when it comes to meeting Hollywood's finest.

Gary, being the first in the lineup of random people plucked out of God knows where to be part of Kimmel's Oscar joke, was the first to be greeted. And his bewildered yet thrilled expression was all that one could possibly hope for. While Kimmel was talking to Gary (from Chicago), he continued to frantically record the stars in the front row on his phone, continuing even when Kimmel reminded him that this is on TV, "you don't have to do that." Gary responded logically with, "Yeah, but I want to." This, of course, spawned dozens of hilarious tweets and memes on the internet, celebrating Gary, and his completely normal reaction to being suddenly greeted with everyone he's ever watched in movies for basically his entire life.

One of the best moments came when Ryan Gosling, because he is Ryan Gosling and can never help himself from doing incredibly Ryan Gosling things, handed Gary all of the candy that Kimmel had sent the audience from parachutes floating from the ceiling, which Gary promptly stuffed into his fiancée's large purse he was apparently carrying around for her.

Another brilliant moment of the night came from Gary's fiancée, who when asked who her favorite actor was pointed directly to Denzel Washington and said, "That man right there." Washington then jumped up, and pretended to marry the couple on the spot. It's Denzel, so I say it counts.

Kimmel also asked Gary if he'd like to speak to Mahershala Ali, who had just won an Oscar for Moonlight. Gary got to hold Ali's Oscar, as he had Ali take the selfie of the two of them with his iPhone, which he still had not put down. It was great.

At an Oscars that was mostly bent on reminding us all to stay very woke right about now (which we definitely need) I can't deny that Gary was a really refreshing dose of hilarity at a time when we need it most. Thank you, Gary, for reminding us of how great life can be.