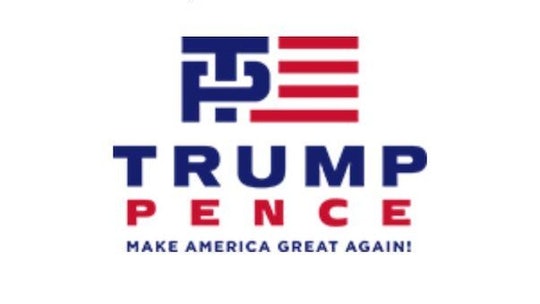 After revealing his VP pick, presumptive Republican nominee Donald Trump debuted his campaign's new logo. Unfortunately, it may lack the decorum his design team likely expected. Funny reactions to Trump's logo may have Trump and Pence asking for a revision.

On Friday morning, Trump revealed that Indiana Gov. Mike Pence would be his choice for vice president, CNN reported. Though he'd initially planned to announce his decision in a Friday news conference, Trump postponed the event after the terrorist attack in Nice, France, and opted to reveal his running mate on Twitter instead, writing, "I am pleased to announce that I have chosen Governor Mike Pence as my Vice Presidential running mate. News conference tomorrow at 11:00 A.M." Pence replied to the announcement on Twitter: "Honored to join @realDonaldTrump and work to make America great again." A former congressman, Pence is committed to conservative values; The New York Times reported that as governor, he's supported controversial legislation related to LGBT rights and abortion. In the months ahead, voters will spend time dissecting his political leanings and determining what a Trump administration would look like with Pence as VP. Unfortunately for Pence, that's not what they're focused on today.

Now that Trump and Pence are on the same ticket, they needed a new logo. They introduced their new graphic in an email sent by the Make America Great Again Committee, according to Politico. Using a color palette of red, white, and blue, the logo features the names of both candidates with the "Make America Great Again!" slogan at the bottom. Though the aesthetic is familiar, it's the graphic on top that's driving Twitter chatter: a "T" and "P" are used to represent the blue part of the American flag, but the design seems to be, as Politico put it, "sexually suggestive." The internet picked up on it right away:

Of course, there are plenty of other creative riffs out there that don't go straight for the sexual association:

Perhaps Trump's team saw this coming and embraced the adage that "there's no such thing as bad publicity." It's also possible that they weren't prepared for the barrage of mocking GIFs and images. But even if the logo isn't imbued with gravitas, it's generating buzz. If Trump's campaign so far is any indication, one of his biggest skills is keeping the conversation going; whether it's intentional or not in this case, he's still got people talking.