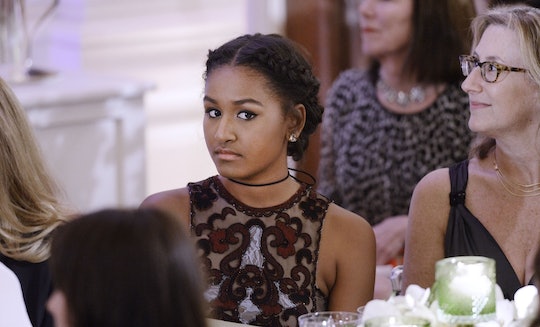 Where In The World Is Sasha Obama?

There was one major thing missing at President Obama's final farewell speech. No, it wasn't a shot of hope. And no, it was definitely not a shortage of tears. The one thing missing at Obama's final speech as acting president was his youngest daughter, Sasha Obama. Luckily, Twitter can be a quick comedian, coming up with some hilarious Sasha Obama tweets about why the first daughter was missing from a pretty big evening for her dad. And while we don't know why she wasn't there (Romper reached out to Obama camp for statement on the youngest daughter's absence), elegantly sobbing next to Malia, these tweets and jokes about her absence almost make up for it. Almost.

Take it as a one time teen girl, weekdays can be tough. Sometimes you have homework, sometimes you have to cover someone's shift at the mall. It's not easy being 15, OK? Sasha Obama, I get you. I'm here for you. And if you couldn't attend for a legitimate reason like Becky S.'s 16th Birthday Bash, girl, we are One.

Of course, leave it to the stand-up comedians on Twitter to come up with some really great ideas of where Sasha could have been on this cold winter night.

I kind of find it hard to believe that Sasha didn't attend on Tuesday evening because she was otherwise occupied. There's a wonderful thing called Presidential Perks that allow you to not worry about sitting in a DC airport terminal studying algebra with the rest of us folks. Regardless of the reason, there's no doubt it's a good one. And, her father didn't seem too upset that she wasn't there — he addressed her as if she was. (At one point, you might have just thought there was some funky camera work going on.)

So now we're all detectives. Detectives and comedians just trying to figure out where Sasha is at the moment of her father's final address. Is she at home, Googling one of the most disturbing Donald Trump-related allegations to date entailing "golden showers", like Twitter user Karina pointed out?

Or was she just stepping out for another reason? Time will tell but there's no doubt that the Obama's have an immense love for each other, no matter the distance between them.