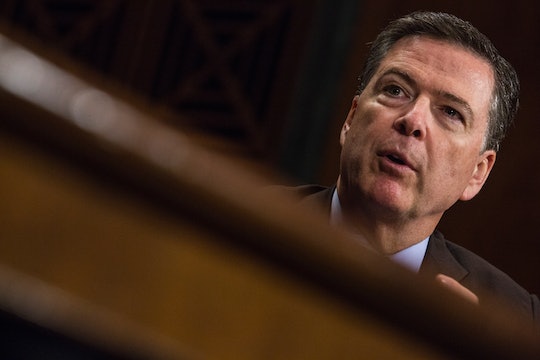 Considering its momentous implications for the sanctity of U.S. government institutions and decorum, there's not much humor in former FBI director James Comey's firing last month. After all, it's all but certain that President Trump unceremoniously booted Comey from the nonpartisan position because he either allegedly refused to pledge allegiance to Trump or got tangled up in something that the president didn't like. Still, the ensuing, public kerfuffle over what, exactly, led to the firing has stoked anticipation for Comey's scheduled testimony on the subject before the Senate Intelligence Committee Thursday. So, when he opted to release the text of his remarks ahead of time Wednesday, netizens identified the hilarity of the situation. These funny tweets about James Comey's Trump statement highlight the pure absurdity of the political moment.

After his team worked to deny this was the case, Trump confirmed that he made what he described as an independent decision to fire Comey in May amid the bureau's ongoing investigation of Trump associates' possible connections with Russian officials. News then leaked that Comey had written detailed notes documenting a face-to-face meeting with the president in February, during which Trump allegedly requested that Comey drop the investigation into Trump's former national security adviser, Michael Flynn. Flynn had been forced to resign the day before, when reports surfaced that he had communicated with the Russian ambassador ahead of his official appointment.

If that's true, some argue, Trump may have allegedly committed obstruction of justice — an explosive revelation that Comey has now repeated on the record in the new transcript of his prepared testimony. Romper has reached out to the White House for a response to the allegations in the Comey testimony and has not yet heard back.

No wonder bars across the country are opening early Thursday so patrons can roll in for morning gin and tonics to watch this insane testimony go down live.

Among the other allegations in the testimony: That Trump implored Comey to publicly announce that he was not personally under investigations for Russia ties; that he told the then-FBI director "I need loyalty, I expect loyalty"; that Trump denied the veracity of a unverified dossier released in January that contained information about salacious sexual activity on his part; that he repeatedly contacted him to discuss the subject — and more.

And, despite the very serious nature of this entire debacle, tweeters far and wide did not disappoint in pointing out that this is so ridiculous that it's actually pretty funny.

After, it's pretty much a soap opera, with its drama and intrigue:

Or an episode of Sex and the City, with its talk of loyalty:

New York Times culture writer and former Trump reporter Sopan Deb even joked that he was going to add echoes of Trump's love of loyalty into a very special speech:

Comey also wrote in the testimony that he did not want to be left alone with Trump, a tidbit that was also reported Tuesday evening. Recalling the myriad campaign-time accusations of sexual assault leveled at Trump (all of which he's denied), some tweeters wrote that Comey now has something in common with the many women who have accused him. They're truly not exactly funny tweets, but important ones nonetheless.

If Comey's testimony blew up Twitter today, just imagine what could happen tomorrow.