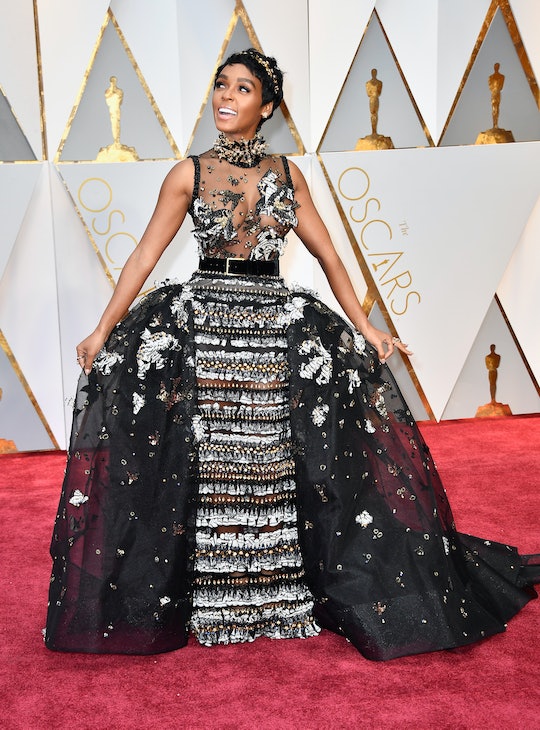 While everyone was blinded by all of the glitz and glam as Hollywood’s finest hit the red carpet at the 89th Academy Awards, almost every fashion piece had viewer's jaws dropping. But, in some cases, people are having a few chuckles, as these funny tweets about Janelle Monae’s Oscar dress have proven. There's no doubt that the actress, whose films Moonlight and Hidden Figures are nominated in several major categories, looked absolutely stunning as she made her grand entrance in a black tulle, sleeveless gown on Sunday night, but people on social media couldn't resist having a bit of fun and cracking a few jokes about her perfectly statuesque poses in a Cinderella-esque dress.

She looked serious, she looked fierce, and she looked beyond happy. She was living her best life at the 2017 Oscars and she absolutely looked the part in her show-stopping gown that was covered in "lines of lace set with feathers, sequins, beads and crystal stones, and a jeweled choker necklace," according to The Hollywood Reporter. "Your first Oscars and you're crushing it," red carpet cohost Michael Strahan told Monae in reference to her gown, as Mic reported.

Monae, who was among Sunday evening's presenters, had one of the most memorable looks on the red carpet. Whether it be the collective gasp we all took when she walked the red carpet or some of the best jokes Twitter had to say about her look, her dress will certainly be one to top next year.

Without further ado, here are some of the funniest tweets about Monae's Oscar dress:

All jokes aside, if anyone could rock this Ellie Saab couture dress with the perfect amount of grace and poise, it's Monae. As Vox's Constance Grady wrote about the breakout actress' "intergalactic splendor":

It takes a specific presence to make a sheer bodice with bumblebees flying across the boobs work, and Janelle Monae is that presence. She looks like the benevolent empress of the galaxy, and I am here for it.

For Monae’s first appearance at the Academy Awards, she did it right and pulled out all the stops. And considering that fact that she was there to represent two of the year's best films, there's no reason she shouldn't have worn such a jaw-dropping dress. "This is her first Oscars, and she’s there for two films, so it felt like 'go big or go home,'" Maeve Reilly, Monae's stylist, told Vogue. "We had no reason to be understated tonight."

Monae looked happy AF at the 2017 Oscars in every photo taken of her on Sunday night and Twitter definitely noticed.