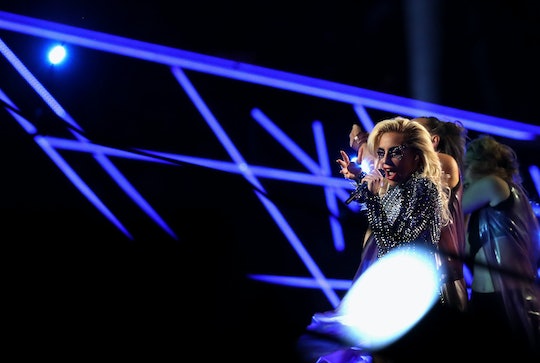 Lady Gaga's Keytar Was The Real Star OF The Show

Proving that Lady Gaga has the power to make anything iconic in .1 seconds or less, funny tweets about Lady Gaga's keytar, which made quite the entrance during her half-time performance at Super Bowl 51, are already blowing up social media faster than the fireworks lit up the Super Bowl stadium after she finished eviscerating our organs with her awesome. Real talk, though: is there anything this woman cannot do? She jumped off the roof of the stadium, then proceeded to bend in 86,000 different ways, take us through about a decade's worth of emotions tied to all of her songs, and then proceeded to drop the mic and LITERALLY DIVE OFF OF THE STAGE. Keep your day job, Spider-Man. We've got all the hero we need right here.

The keytar, though, truly added a Next Level element to her performance, as demonstrated by people's reactions on social media. And honestly, if anyone was going to pull off this ~lewk~, of course it would be Lady Gaga. Honestly, I think I just blacked out and bought one online so I could walk around holding it and pretend to be .05 percent as cool as she is. At least I'm not the only one on #TeamKeytar. Here are some of the many winning reactions to her hybrid instrument tonight, which is every bit as flawless, bold, and iconic as she is:

A Tribute To The Master

A Blast From The Past

OK, if I were Spongebob's agent I might be a little bit suspicious right now — that is, if Lady Gaga's fashion weren't so much more on point than his.

TBH, this is also the reason for the Teardrops On My Keytar.

Proof Lady Gaga Is The Most Accurate Measure Of Time

Thankfully "Born This Way" said all the words that the keytar may have said a little too subtly.

Shoutout To All The New Musicians About To Hit The Stage

The next great keytar player was born tonight.

Will The Real Disco Stick Please Stand Up?

So THIS is what she meant by disco stick the whole time? WHOA, guys, we were way off the mark. YIKES.

Well, if anyone needs me, I'll be furiously air-keytaring until further notice, because we are all so #blessed.