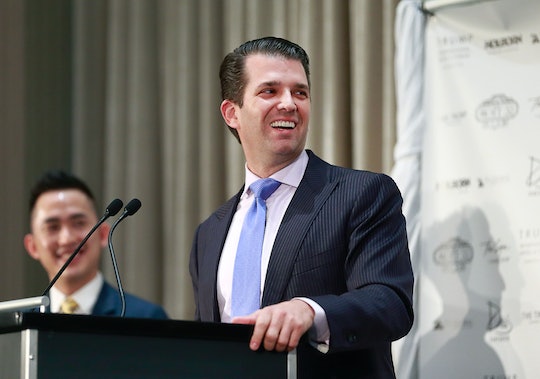 On Tuesday morning, in response to a New York Times article that alleged Donald Trump Jr. was told in an email that Russia was trying to influence the election so that his father would win, Trump Jr. tweeted out images of the referenced emails in an attempt to prove that he did not collude with an official tied to the Russian government. The emails state in plain text that one of President Donald Trump's former business partners wanted to set up a meeting between Trump Jr. and a Russian lawyer to pass him documents that "would incriminate Hillary and her dealings with Russia and would be very useful to your father," according to the tweets and The New York Times. Now — because how could this really get any more ridiculous — funny tweets and memes about Trump Jr.'s emails are sprouting up across Twitter. How else do we cope with this kind of news if not with humor, right?

This latest revelation comes just days after President Trump met with Russian President Vladimir Putin. According to Secretary of State Rex Tillerson, who told reporters at the summit of leaders of the Group of 20 major economies in Hamgurg, that Trump and Putin had "positive chemistry" during their two hour and 15 minute meeting. Trump also tweeted a few descriptions of his meeting with Putin, saying. "I strongly pressed President Putin twice about Russian meddling in our election. He vehemently denied it. I've already given my opinion...."

The ongoing Russia scandal has been nothing short of taxing to any American voter worried about the safety of our nation's democracy, so it's nothing short of understandable that in the midst of so much scandal people are taking to Twitter to express their concern via humorous memes. Here are jut a few:

It's worth mentioning, and it seems as though many Twitter users agree, that Fox News has been covering the ongoing Russian scandal in a somewhat "interesting" way. In fact, their coverage might actually be hurting their ratings, according to a May 23, 2017 report by the Los Angeles Times, in which the paper reported that "FOX finished behind CNN and MSNBC among viewers ages 25 to 54, the demographic most important to advertisers who buy commercial time on networks." The reason for the drop in ratings? According to the Los Angeles Times, the ongoing story of potential Trump campaign collusion with Russia isn't boosting FOX viewership numbers the way it's aiding MSNBC or CNN because "conservative commentators were more skeptical about the significance of the nearly daily leaks related to Trump's handling of Comey's dismissal and reports that the president shared classified intelligence with Russian diplomats during a White House visit."

It's impossible to know, for sure, how all of this scandal will shake out, and how the ongoing coverage will affect Trump, his family, or his presidency. But until the dust settles and the history books are written, at least we have Twitter and it's wonderful memes, right?