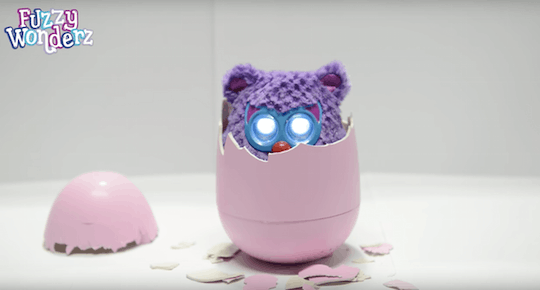 The hottest toy of 2016, Hatchimals, have been increasingly difficult for parents to get their hands on. The interactive hatching toy has been flying off the shelves this holiday season, and a similar toy has popped up amid the craze. But some parents who have attempted to order the second toy for the holidays have encountered problems, to the point that they're asking, are Fuzzy Wonderz real? Some concerned consumers even claim that the Hatchimals look-alike might be a scam.

Fuzzy Wonderz responded to Romper's request for comment via Facebook with the following statement from a customer service representative who gave his name only as Steve:

We understand that there is a group of Fuzzy Wonderz customers who have been upset about the delays of our shipping. We have conveyed to them that all back orders will be shipped by the end of the week. We are extremely proud of the products we are putting out and know that our customers will love it! At the end of the day, the demand for our Fuzzy Wonderz has been unprecedented. We have increased our production capability to match the demand while still delivering the same quality that meets our high standards. Our offices are located in NY while our warehouse is located in China.

Steve also added, "We're an authentic company that just got hit with the holiday rush," and offered to send the product to Romper's office. Fuzzy Wonderz Facebook page was down for a short time on Tuesday night, and on Wednesday morning, a Fuzzy Wonderz page was back up with the following message:

We discovered this morning that our previous Facebook page was disabled and we are working with Facebook to have it restored. Reaction to Fuzzy Wonderz has been far greater then we have planned for and we are grateful. We have been shipping on a first come, first served basis. Current estimates show us shipping all orders within this week. We are very confident in this. To all our customers who have received tracking information we hope you enjoy your Fuzzy Wonderz, for those who have not yet received shipping confirmation with tracking numbers-you should be receiving them promptly. Our customer service department is being expanded to handle increased call volume as quickly as possible. We appreciate your patience and hope to have your continued support.

In an email to Romper, dad Robert Morin described what he claims happened when he tried to order the toy, which became available online shortly after Hatchimals debuted this fall. Morin explained via email that he thinks the company behind Fuzzy Wonderz is questionable, might not even be a company that sells toys. Morin said he first placed his order on Nov. 23, and that he's been in a back-and-forth with the company ever since trying to get his order canceled and refunded:

More and more people are commenting [on stories about Fuzzy Wonderz] and describing there stories on here many the same like mine. So many people have ordered and have not received a product. That's not the worst part though. When we request refunds over the phone they say yes. They say that it will take 2 days to process the refund at which time your bank will be refunded.

Morin, and others who have lodged complaints, also claim to have had communications with Steve from customer service.

And, still, Morin claims he has yet to receive a refund. He also claims that the company will delete any negative comments left on its Facebook page, where he says a number of people have voiced concerns about not yet receiving their Fuzzy Wonderz orders. Upon checking Fuzzy Wonderz Facebook page, it does appear that there are negative comments on it, with a number of people making complaints similar to Morin's. Many of the commenters said, as recently as Dec. 5, that they received messages from the company saying their orders would be shipped on Dec. 7 once the company received a new shipment of toys.

Together, with more than 100 other parents who have allegedly been stiffed by the toy company, Morin is part of a Facebook group called "Fuzzy Wonderz A Scam?" Tuesday morning, group member Karma Jordan posted that she attempted to call the company and only got through after the phone rang "for an hour and 7 minutes."

When I attempted to call, I heard prerecorded message warning customers of long phone wait times. After waiting for 22 minutes, the call was still ringing and I hung up. A request for comment sent to Fuzzy Wonderz via email has also yet to be returned.

Several people who posted in the Facebook group reported being blocked by the company on Facebook after several attempts to contact the company about their order, and one woman reported that she finally got a parcel in the mail from the company — only to discover it was nothing but an empty box.

Romper's attempts to contact the Fuzzy Wonderz Facebook page were also unsuccessful, and Romper could not confirm if users had been blocked.

The website ScamAdvisor purports to provide some information on the company based on an analysis of the website, which is less than month old. It also claims that the owner of the website is allegedly using an anonymous service to obscure their location. While some businesses employ this method to avoid being spammed, those who are questioning the company's authenticity wonder if its intentional. The About Us page on the company's website yields no information about its location.

A blog called Little Crunchy told another story about Fuzzy Wonderz in a post published back in November, shortly after the company's website was created. Throughout the last few weeks, the blogger has updated the post as more parents have come forward with complaints about the company. The most recent update on Monday urged readers to report the company to the Better Business Bureau, as well as the Attorney General's Office in New York, in hopes that if private citizens can't get a straight answer about the company, the government might be able to.

The comments on Little Crunchy's post echo the claims posted on the Facebook page group: parents who purchased the toy online never received it and made many failed attempts at contacting the company. Another commenter pointed out that the toy looks remarkably similar to a toy produced in China back in 2014 called Hibou, though Fuzzy Wonderz also supposedly include a shell, making them similar in appearance to Hatchimals.

While it appears that there were YouTube videos from the company showing Fuzzy Wonderz in action (as evidenced by the few screenshots above), the original videos appear to have been deleted.

“BBB opened a file on the company on December 2 when we received the first of several complaints,” BBB national spokesperson Katherine Hutt says in an email to Romper. “These are now in the dispute resolution process, and will be published on our web site when they are resolved." Hutt confirmed that "dispute resolution process" meant the complaints against Fuzzy Wonderz are still being investigated, which, for parents who have already purchased the toy, means they aren't likely to have a sure answer about just what Fuzzy Wonderz is up to until well after the holiday is over.