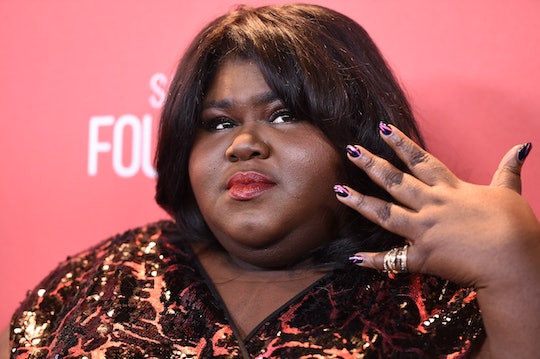 Gabourey Sidibe Was Fat-Shamed For Her 'Empire' Love Scene, & Her Response Shows What A Body Pos Role Model She Is

While being plus-sized in Hollywood is getting easier, it is still not easy. A good reminder of how celebs’ bodies are put under a microscope came when Gabourey Sidibe’s Empire character, Becky, had a love scene on last week’s episode. Once again, the Internet showed how cruel it could be by creating a less-than-flattering meme fat-shaming. But in a Nov. 5 Entertainment Weekly blog, Gabourey Sidibe responded to the fat-shamers perfectly: telling them she’s #Booked and has better things to do than partaking in a Twitter tit-for-tat about her body.

We love her on Empire and lived for her on American Horror Story: Coven, but now we have another reason to love her: her effortless smackdown of the ever-present peanut gallery. Liveblogging the episode on EW, Sidibe also wrote about Hakeem’s kidnapping, Cookie and Lucious’ ever-changing relationship, and “that fine ass Becky is on a rooftop in the afterglow of doin’ it all romantic-like with some mostly naked dude.” And while she was all “YASS Becky and Naked Dude!!,” some people online decided it would be the ideal time to bash her and her body and insinuate that *gasp* a larger woman can’t be sexual without it being a joke.

Tweets like these are disheartening, though there were plenty of others on Twitter coming right to her defense.

Though what's getting Sidibe major points — and most of the attention — is how she responded to people who think her body is a punch line. She masterfully penned:

Also, yes. I, a plus sized, dark-skinned woman, had a love scene on primetime television. I had the most fun ever filming that scene even though I was nervous. But I felt sexy and beautiful and I felt like I was doing a good job. I’m very proud of the work we all did to make that scene a great opening for the episode. I keep hearing that people are “hating” on it. I’m not sure how anyone could hate on love but that’s okay. You may have your memes. Honestly, I’m at work too busy to check Twitter anyway. #Booked. Hope you enjoy next week’s show!

...And like Sidibe wrote: “Good for that fine ass Becky.”