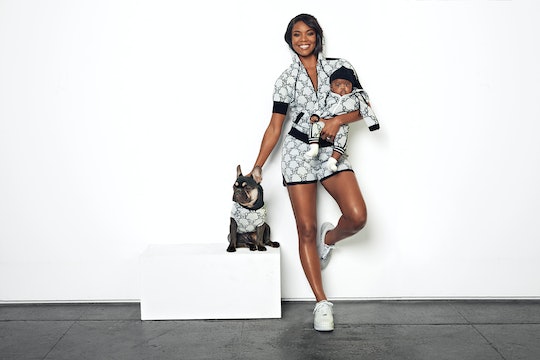 Gabrielle Union's Clothing Line Inspired By Her Daughter, Kaavia Is Too Cute

Gabrielle Union and her 5-month-old daughter with Dwayne Wade, Kaavia James, are so adorable. Union has been super open about her new life as a mom and how it has inspired her in so many ways. And as it turns out, motherhood has also inspired Union to design children's clothes. Yes, Gabrielle Union created a clothing line inspired by her daughter Kaavia, and it is as adorable as the little girl herself.

Union already has a line with New York & Company — but on Friday, Union expanded that line to include children in it. Union's new line, "Kaavia James by Gabrielle Union" is comprised of several different pieces (which can mix and match) and has some serious spunk. The clothes are fun and perfect for a fashion forward baby — or their parents who are looking for some seriously cute clothes to dress their kid in. Although the fashion line looks super expensive, it won't cost parents an arm and a leg. The clothes, which are designed for children from 0 to 24 months, range in price from $14.95 to $44.95.

As if parents couldn't love this line enough, Union also designed the line to be all inclusive, so it includes a lot of unisex pieces (and some mommy-and-me outfits, too), according to People. Anyone can find this line on New York & Company's website right now or they can wait for it to hit select stores on Monday, May 6.

The super cute pieces from the line will definitely want to make people head to the mall as soon as they can next week.

The super bright and sassy line is inspired by Kaavia's bright (and sassy) personality, according to People. Several pieces from the collection have the phrase "#shadybaby" on them, which is how Union and Wade describe their little girl on Instagram. In February, Union opened up to People about her daughter's super serious personality. "She looks just like Dad, but I like to think the attitude is from me," she said. "She will stare into your soul, and tell you about yourself through her eyes."

And in an interview with Women's Wear Daily, Union expanded on how her daughter helped her with her first children's line (which is also New York & Company's first line for babies). "I wanted to create a baby collection because it is a natural progression of where I am in life right now, and it has always been important to me to make sure that the collections that I design reflect a part of me and are true to what I think many women can relate to," she said.

There really is a part of Union in the line and her fans can clearly see that. Not only does she pay tribute to her own #shadybaby in the line, but a few of the pieces are inspired by Union and Wade's french bulldog, Tre, according to Us Weekly.

On top of this, Union created the whole line with Kaavia in mind. Union told Women's Wear Daily that she specifically designed these clothes (and the fabrics) for her daughter to wear, which should be so reassuring to fans. "I like soft fabric and steer away from anything that looks too adult," she said. "I know my time choosing what she wears is limited so I'm taking advantage of it while I can."

Rest assured that fans will love Union's line for their kids. And the best thing is, they can shop her line for adults while they're picking up something super cute for their little one. There has never been a better time to treat yourself (and your little one at the same time) than now.