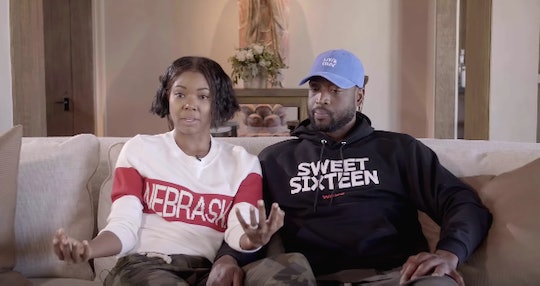 Since their baby girl was born, little Kaavia James' parents have been the picture of familial bliss. They've provided their followers with plenty of updates on their little family. Most recently, Gabrielle Union and Dwayne Wade shared a sweet video about their journey to parenthood and it filled in some blanks on how Kaavia made her arrival.

Kaavia James Union Wade was born on Nov. 7 via surrogate, according to E! News, and is the couple's first child together. About a month later, Union and Wade opened up about the road that led them to parenthood in a video posted to Instagram. In it, the two of them reflected on everything that they had been through as a family, both the joys and the heartache, as TODAY reported.

In the caption to her post, Union explained that every family is unique and the ways in which they bring a baby into their lives differs as well. "Kaavia James Union Wade’s journey into our arms was long and at times brutal. There were heartbreaks that nearly broke us and streams of tears that turned into raging rivers. And then came Kaavia James," she wrote, according to People. "This is our birth journey. Thank you all for the love, support and understanding and all the people who held us up when we lost hope. Watch it with love. Watch it with hope."

All of the pain that they endured together was worth it, as Union said in the video. "We're finally getting to the place where there's this little person that will call me mom. We're just so grateful and so thankful for the gift that they've given us."

Along with their Instagram posts, the proud parents also posted a longer video to YouTube that includes Wade talking about what Union went through to become a mother. Union has been open about her numerous pregnancy losses, according to TODAY, and in her memoir from last year, she shared that her miscarriages totaled up to "eight or nine." She goes into these losses in the video, as well. "It wasn’t actually the problem of getting pregnant, it was holding the baby,'' she said.

As for why Union miscarried, she explained that it was due to adenomyosis, a condition that causes the lining of the uterus to grow into its muscular wall, according to USA Today. Along with miscarriages, it causes heavy menstrual bleeding and pelvic pain. She told Essence that the diagnosis was something of a relief to her:

Towards the end of my fertility journey I finally got some answers, because everyone said "You’re a career woman, you’ve prioritized your career, you waited too long and now you’re just too old to have a kid — and that’s on you for wanting a career." The reality is I actually have adenomyosis.

After trying to conceive and carry to term numerous times, the couple decided to hire a surrogate. But the fact that someone else carried their child doesn't make her any less theirs, as Union said in the video:

We just decided as a family that the best and safest route was a surrogate. For us it's our embryo, so our surrogate has no genetic tie to our baby.

The video also show Wade and Union in the hospital, moments after the surrogate gave birth to Kaavia via C-section. The two were obviously in love with their daughter from the moment they met her. Along with her doting parents, Kaavia also has three older brothers from Wade's previous relationships: Zaire, 16, Zion, 11, and Xavier, 4, and Wade's nephew, Dahveon Morris, 17. The four boys are the ones who Union credits for bringing her around to motherhood, as she told People in 2017. Fans of the family can rest assured that Kaavia has lots of love at home. In fact, there's video evidence of it.