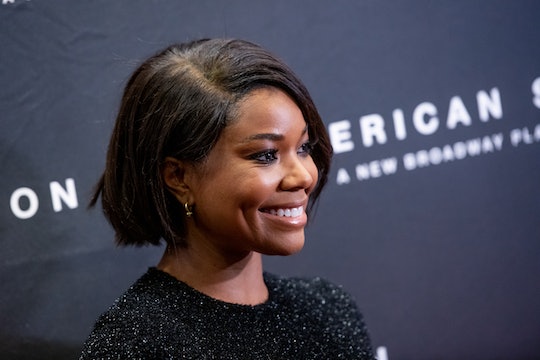 If you followed Gabrielle Union's difficult fertility journey over the years, then you probably understand why she was ecstatic to welcome her daughter, Kaavia, into the world via surrogate in November. Now the new mom is taking the proper steps to ensure her miracle baby stays healthy, even if it ruffles a few feathers. Case in point: Gabrielle Union won't let unvaccinated people meet baby Kaavia.

Union and her husband, Dwyane Wade, sat down for an interview with Oprah Winfrey that aired on Sunday. And as one might expect, the chat — that took place at the couple's home — required the help of Winfrey's production staff.

Given the health risks associated with newborns, Union made sure Winfrey's employees received their whooping cough vaccinations before entering her home, as she shared on Instagram. But wait — that's not all; Union also confirmed that every person in Winfrey's crew had an up-to-date vaccination record. Way to stay on top of things, mama.

Union's precautionary measures came to light after some fans criticized her for kissing Kaavia on the lips in an Instagram photo. While kissing newborns is mostly harmless, it can be especially dangerous if you're unvaccinated or if you have HSV-1 aka oral herpes, according to the New York State Department of Health.

Of course, Union would never kiss her child if she knew it could potentially cause her harm. The actress reiterated this sentiment in a response to concerned fans, writing, according to Yahoo:

Kaav is healthy and I don’t even touch her without washing and sanitizing myself and everything and everyone that comes into contact with her. No visits with sick folk, and even all of Oprah’s crew got whooping cough vaccinations and current on all vaccinations to be in our home.

The best part of Union's note? She made it a point to drive home how she'd never put her baby in harm's way.

“If you think I waited this long and went thru all this to put my baby in harm’s way, you got another thing coming," she wrote.

Many fans are supportive of Union's actions, with some people taking to social media to commend her parenting.

"Her baby, her rules tf," a fan wrote on Instagram. "She had nine miscarriages, anything for her baby at this point should never be deemed overprotective."

Someone else said: "She’s had 9 miscarriages, now finally has a baby. Either get the vaccine or don’t go. Simple."

"I’ve heard of too many instances where people went around newborns with something that they might consider 'simple' like a flu & then they pass that on to the baby and it turns out into something so big‼" another person added.️ "Can’t blame her."

Sadly, there will always be people out there who will question Union's parenting decisions. But it's clear Union could care less about her critics, which is her prerogative given that baby Kaavia's health and well-being is what's at stake.