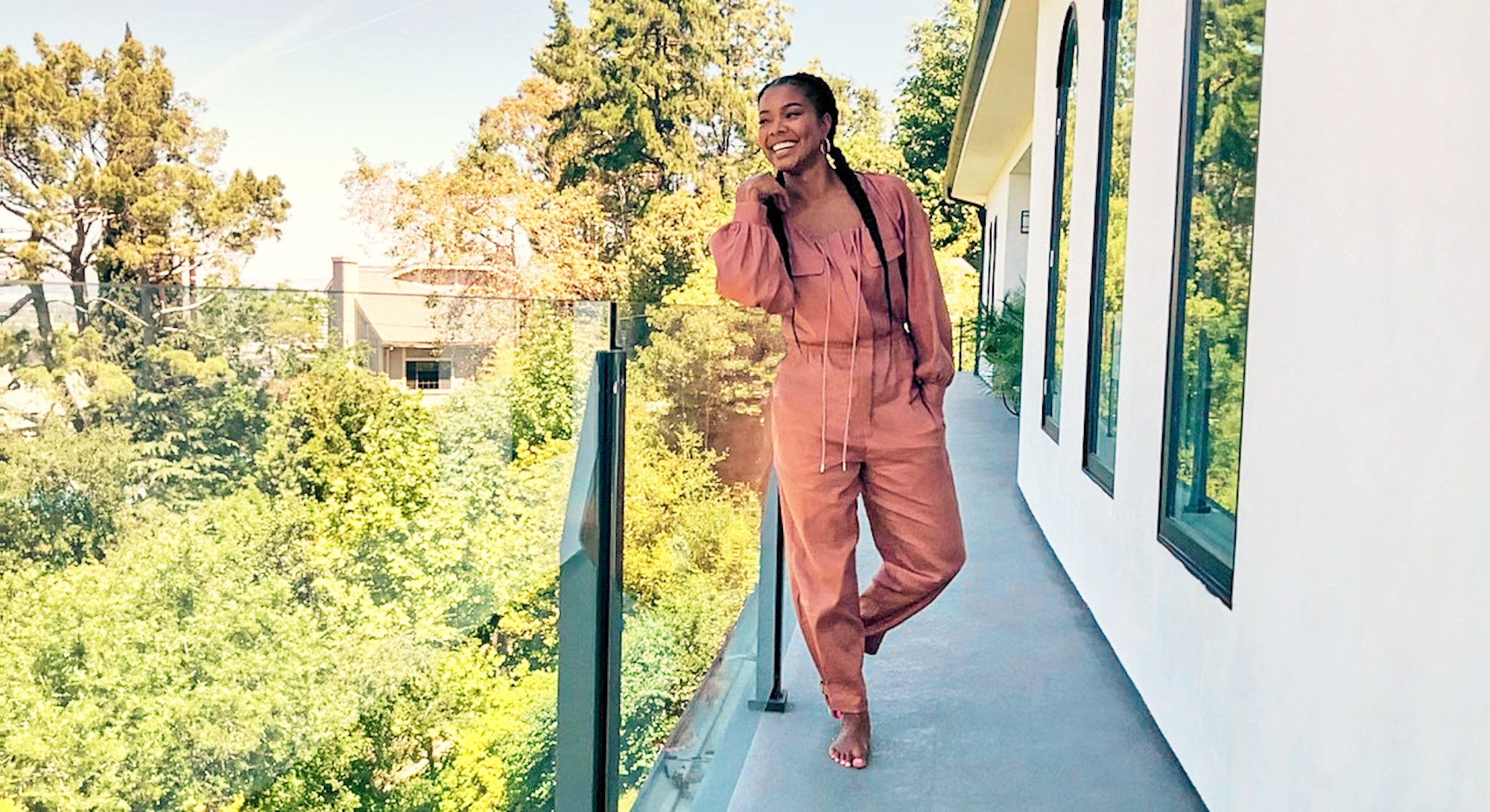 Gabrielle Union Has The Quarantine Dream-Team

Gabrielle Union chose the best quarantine house. It comes with a pool, a basketball star husband, an adorably shady toddler, a tween, an adult sister, and one family friend. The dress code is bathing suit casual; pajamas if it’s time for free throws into a 3-foot-tall hoop. “I lucked out with the combination of people,” Union says from her Los Angeles home, two months into social distancing. “We can kind of cover for each other when somebody is at their limits.”

If it looks like she’s having too much fun, that’s because, in Union’s world, “family” is synonymous with “party” — a gathering that gets better as it gets bigger. When she married Dwyane Wade in 2014, Union became stepmother to his three children, Zaire, Zaya, and Xavier, and his adopted nephew Dahveon. She struggled with infertility for years before welcoming 18-month-old Kaavia via surrogate in 2018, an experience which inspired her new children’s book, Welcome to the Party. “We had to go a more nontraditional route” to bringing Kaavia into the family, says Union, who noticed that there were very few books or shows for children that “capture this route into the party.”

“It's our egg and sperm and our surrogate cooked our baby, but that's it,” she explains. “My dad cannot wrap his brain around [the idea of a] gestational carrier, that our surrogate doesn't have any genetic tie.” (Gestational surrogates carry embryos conceived using the intended mother’s egg, or a donor egg.)

Union, 47, began her career in chipper roles on Saved By The Bell, Sister, Sister and 7thHeaven before her 2000 breakthrough as Isis, captain of the Clovers cheerleading team in Bring It On. In the decades since, she has been a welcome presence in movies like Bad Boys II, Think Like a Man, and The Birth of a Nation, and won a NAACP Image Award for her starring role in Being Mary Jane.

But, in recent years, we’ve heard more from Union herself. Her bestselling 2017 memoir, We’re Going To Need More Wine, put her on the map as a writer, as well as an advocate for women who have experienced sexual assault and miscarriage, as she has. In 2019, she reportedly left a job as a judge on America’s Got Talent after speaking out about racism on set. (Union herself never commented, though Wade expressed frustration at her "being fired.") In a February Time op-ed, Union and Wade talked about their education as parents after Wade’s daughter Zaya came out as transgender. “We didn’t change overnight — we weren’t immediately the perfect allies,” the couple wrote. In unpacking their own thought processes and taking a public stand for their daughter, they emerged as parenting authorities. “The biggest lesson we can offer is: listen to your child,” they wrote in Time.

All you can be is a great example. They don't need to be your mini-yous.

Union’s philosophy of family underpins the new book, illustrated by Ashley Evans. Initially, the project was conceived as a “lasting love letter” to Kaavia. But in the process of writing it, she thought of her own mother who, in her 60s, adopted three children: “She's 73, a single mom and a senior citizen raising teens and preteens.” Union thought about the “chosen families” of LGBTQ+ people, and saw a common thread. “Any individual that's coming into a family unit, however that is created, just knowing that it's a party: you are welcome, you are loved, you are celebrated.”

Union’s experience parenting Zaire, Zaya, and Xavier opened her eyes to the influence we have on the people we love, regardless of genetics. “You can try to create them in your image, even if you are their stepmom,” she says, “and the more that they reflect you back onto you, the more you feel like you're doing a good job…. All you can be is a great example. They don't need to be your mini-yous.” (Though Kaav does have her own miniature Clovers costume.)

She says that the isolation imposed by COVID-19 has allowed her to dig deeper into the parent she wants to be. Take a moment recently when Kaavia took a tumble in the backyard. “I was like, ‘Get up, you're OK, you're OK,’” recalls Union. Kaavia stood up, “stone-faced,” in keeping with her stoic personality. “But she was bleeding, and I was like, ‘Oh my God, that’s same thing that my dad did to me; [asking her to] deny the real pain that you are actually feeling to make me feel comfortable as the adult.’”

According to Union, she has to fight not to let the pain and loss she experienced in miscarriages color her parenting. “I don’t want to be led by fear… She’s going to have skinned knees and she's going to hit her head and she's going to fall down,” she says. “We want her to know that she's loved and she's cared for and she's nurtured without smothering her.”

Union told herself not to let the moment pass without unpacking it and learning from it. “Because there's something deeper here than a baby falling. It's deeper and it goes back through generations, and we can stop these cycles when we can identify them.”

I've spent a lifetime of therapy. Literally half my life in therapy, unpacking being emotionally stunted, and it goes beyond being a sexual assault survivor. It starts with how we're parented.

Another parenting moment that prompted Union to pause and reflect: teaching her stepdaughter how to shave. She was about to show Zaya, 12, how to shave her armpits, as her own mother had shown her at the same age, when she realized how unnecessary it was. “I got the razor in hand,” recalls Union, and “I was like, ‘Armpit hair isn't necessarily a woman thing and having it or not having it is an individual choice and having bare armpits isn't going to make you any more of a woman and I don't want to impose my thoughts about armpit hair on another woman, so if it's something that you're interested in, cool. If not, guess what, still a woman!”

Quarantine can be an opportunity for what Union describes as “shooting past your brain and your ego and your id and all of that and kind of touching base with your soul.” “I've spent a lifetime of therapy,” she says. “Literally half my life in therapy, unpacking being emotionally stunted, and it goes beyond being a sexual assault survivor. It starts with how we're parented.”

Union’s parenting philosophy can be summed up by what she describes as “loving them where they’re at.” While there will be guidelines in place to make sure Kaav is “not a jerk,” jokes Union, she is prepared to follow where her children lead.

“I lucked out that Kaav came to us with a very distinct personality,” Union says. “[We want to] allow her to be exactly who she's going to become,” allow her “space to take up space.”

For now, that space is slightly limited, and so is the party: a house with four adults and two children riding out the same global crisis just like the rest of us. “We’re kind of built for isolation.” Built, here, is the operative word. “I don't know if they all realized we'd be a team, but that’s how it ended up.”