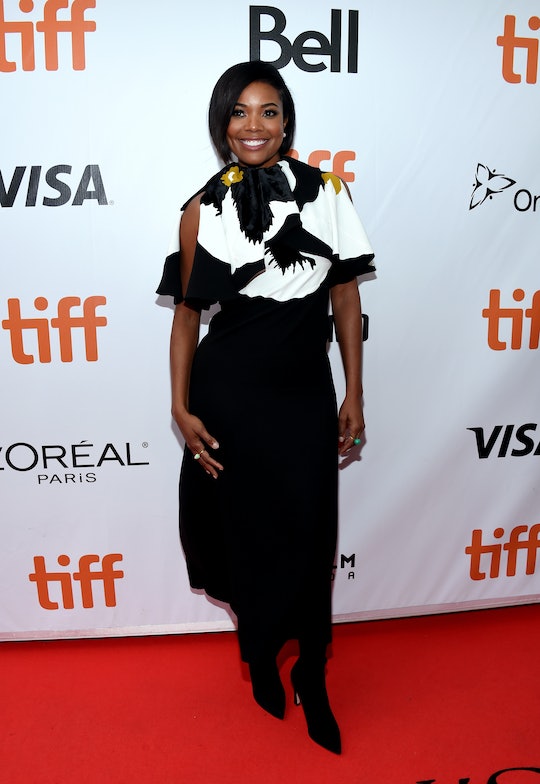 It's been an eventful couple of months for Dwyane Wade and Gabrielle Union. The pair welcomed a daughter, Kaavia James Union Wade, via surrogate in early November and have since been enjoying plenty of time with their girl, reveling in her many firsts. Kaavia has also been very present on social media — she even has her own Instagram account. Not bad for a baby who's not quite two months old. Gabrielle Union's Christmas Day photo with Kaavia James shows that this new mom's wished-for Christmas gift actually came about two months early this year.

Kaavia James is Union's first child, but she also co-parents Wade's three sons, Zaire, Zion, and Xavier, and his nephew, Dahveon Morris, according to Today. Union announced the birth of her daughter on Instagram on Nov. 8, noting that she was born the day before.

"We are sleepless and delirious but so excited to share that our miracle baby arrived last night via surrogate and 11/7 will forever be etched in our hearts as the most loveliest of all the lovely days. Welcome to the party sweet girl! #onelastdance," the Being Mary Jane actress captioned a shot of her getting a little skin-on-skin time with her new daughter as Wade looks down at Kaavia.

Union is so obviously in love with her family's new little member — and it seems that the rest of the family is just as smitten. Union has posted photos and videos on Instagram of Kaavia snuggling with her dad, being fed and held by her big brothers, and more.

And though the Bring It On actress is clearly enjoying her new role, getting to this point — and being so open about the emotions that come along with it all — hasn't always been easy. There was a time when she felt as though she would be letting people down if she couldn't get pregnant.

"I could not let go of this idea of creating this life within me that I could feel, that tied me to him, and that the world could be a part of," Union told Oprah during an interview, per the Oprah magazine. "I'm not letting myself and all these people down. I need to be pregnant for everybody, including myself."

The couple ended up enlisting the help of a surrogate to carry their "miracle baby."

And on Tuesday, Dec. 25, Union posted the sweetest photo with Kaavia to her Instagram account. Both mom and daughter look completely blissed out and content, enjoying a quiet moment in the midst of the oftentimes-chaotic holiday season.

Union added a message to those "feeling alone, scared, unsafe, unsure, without hope," as well, noting that they are, in fact, loved, even if it doesn't seem like it, particularly during this time of year, when it seems as though you're expected to be happy, full of love and fun, and just generally jolly, even if you're not — or can't be.

"The blessed gift that keeps on giving. 💛👶🏾💛👶🏾 Merry Christmas! To everyone feeling alone, scared, unsafe, unsure, without hope... hang on. Hang on. You are loved and you are not alone. Been there, hold on. Love and Light to all," she captioned the photo.

Union, Wade, and the kids spent Christmas Eve on the water, as People reported. In a series of photos and videos posted to Union's Instagram Story, Kaavia seemed to really be enjoying her first Christmas. But, really, the whole family appeared to be having a ball. Can you blame them?

Whether lounging around on a boat or lounging around at home, it seemed that little Kaavia had plenty of time to snuggle with her mom and dad this Christmas. And given that she was the Christmas gift that came early this year, it seems safe to say that they don't mind it one little bit.