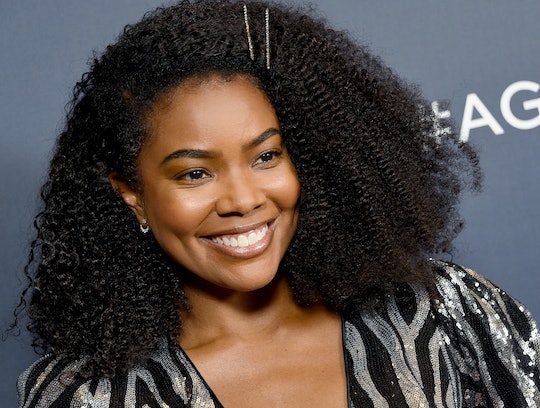 She finally got her dream come true in the form of a child with husband Dwayne Wade, aka daughter Kaavia James Union Wade. And if Kaavia isn't cute enough all by herself (hey, the kid has over 900,000 adoring followers on her very own Instagram account), Gabrielle Union's daughter channeling Bring It On takes the cuteness cake. Talk about a reason to cheer, right?

Union, in her home state of Nebraska, just had to put Kaavia in an adorable outfit that was gifted to her courtesy of local restaurant chain Runza, which bills itself as a "Nebraska tradition" with "legendary" burgers, sandwiches, and onion rings (uh, sounds good right about now).

The cutest part? The green, yellow and red mini-cheer outfit, fitted just for a 10-month-old, is an-almost perfect clone of mom Union's infamous outfit from her 2000 hit, Bring It On, in which Union played a member of the "Clovers" cheer squad opposite Kirsten Dunst.

“Bring it!!!!!” Union captioned the Saturday pics, which were shot while Union and Wade visited Omaha, Union's birth place. "Of course I brought it. #Clover4Life #BringItOn #NebraskaGirl." How cute!

Union, star of the Spectrum Originals show L.A.'s Finest alongside Jessica Alba, has been having literally the best time of her life, or so it looks, since Kaavia was born via surrogate last winter, as People reported.

From taking Kaavia on a tour of Europe to not leaving her home with a sitter when she hit the red carpet at the Nickelodeon Kids' Choice Sports Awards with Wade in July, Union clearly doesn't want to close her eyes and miss a thing when it comes to baby girl's early years.

“It’s amazing,” People quoted Union as saying. “Obviously our story [of infertility] is very documented and we were waiting on her arrival for a long time. … It’s a lot for her but she will look back at these moments and appreciate them when she comes back again and she’s walking.”

In fact, Union's whole Instagram account is pretty much devoted to this kid and the rest of her family with Wade, including her stepsons.

Circling back to this iconic photo, Union's friends and fans, including Shonda Rhimes, Ashley Graham, and Natalie Portman all shared their appreciation for the post. And although I didn't see any online comments from Dunst, she did mention on episode of The Kelly Clarkson Show, that "if they wanted to make [a follow-up]" to the movie, she'd be down. "Why not? It'd be so fun!" she shared, according to POPSUGAR.

While we wait for that epic rematch to happen (and please cross your fingers), Union definitely has enough going on. Wade recently retired from the Miami Heat for a move to Los Angeles, where Union is able to focus on her career. Wade will increase his portion of co-parenting to make it all work, as the couple told ESPN.

Whatever they do next, this modern family — whose blended brood includes Kaavia, Wade's sons Xavier Zechariah, 5½, Zion Malachi Airamis, 12, and Zaire Blessing Dwyane, 17, plus live-in nephew Dahveon, 17, — is sure to do it in style.

After all, if Union can get a toddler into a cheerleading outfit and get the kid to smile in it, there's really nothing as a parent she can't accomplish.