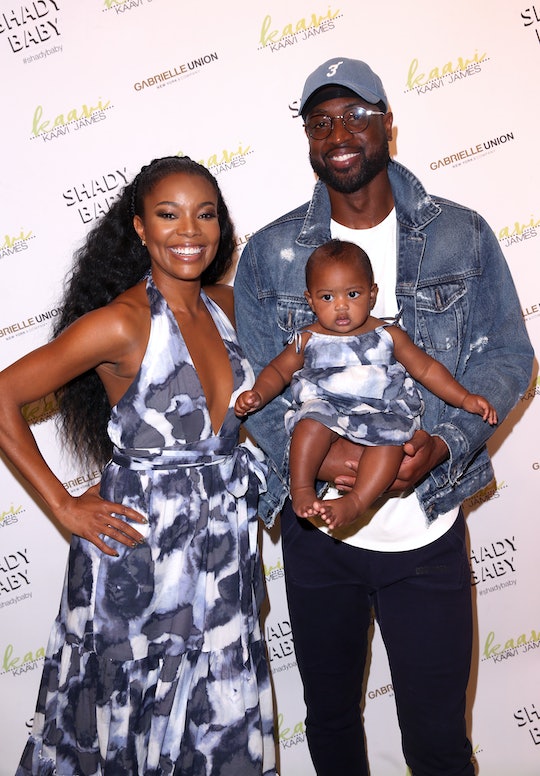 Gabrielle Union and Dwayne Wade welcomed their first child into the world together through a surrogate late last year. Although Union has so much to celebrate this Mother's Day, she has also admitted that it hasn't been easy for her. This is why Gabrielle Union's Mother's Day message on Instagram is such a touching tribute to all moms who have struggled at some point in their lives. While there is so much happiness associate with Mother's Day, there are, understandably, some tears associated with it, too. And it's important to bring attention to why those tears exist.

Union has been open about her incredible journey to becoming a mom. In her 2017 memoir, Union wrote about having "eight or nine miscarriages," according to Glamour, and has since shared her struggles with infertility. But some good news was finally bestowed to the couple at the end of last year — they welcomed their daughter, Kaavia James, with the help of a surrogate mother in November, according to People. This Mother's Day is Union's first with Kaavia in her life, so obviously a lot of emotions are involved — and she highlighted all of these emotions on Instagram.

In the post from Sunday, Union shared a photo of Kaavia in the delivery room, the second she was born. Wade can be seen looking like a proud father, taking a photo of his daughter with his phone, while she is suspended in the air by her doctor. Union's face has so many different expressions on it at once — she looks shocked, elated, and so in love with her baby girl. Her caption for the post is even sweeter than the photo itself.

"I've cried so many times today for so many reasons, mainly because I'd gotten accustomed to heartbreak and disappointment," Union wrote.

"This moment reminded me that miracles do happen," she added. "You can't age out of joy. You are worthy. You are so worthy. Sending so much love today to all the mamas, stepmamas, grandmas, aunties real and play, daddies, friends, and anyone who has taken the time to nurture another living soul. I see you, I gotchu."

It's an honor for Union to share this very special and private moment with her followers. In the May issue of Parents, Union described this exact moment to the magazine. "It was such a relief," she said. "To hear her breathing and crying was a dream. We didn't really allow ourselves to believe it until them."

But her Mother's Day post wasn't just for her. As she stated, it's to remind anyone out there who is going through a rough place on Mother's Day that they are worthy of a miracle — just like she was blessed with one last year. Needless to say, her followers are just as emotional as Union is over this incredible post.

"This is so awesome," one commenter stated. "Crying, again. Happy Mother's Day!!!"

You can sense how much of an emotional day this is for Union based on all of the comments she has made about her daughter and all of the super sweet photos that she posts of her.

In that same issue of Parents, Union said that Kaavia has meant so much to her and the members of her family. "Kaavia really is the personification of hope for a lot of people like us, who maybe didn't have a lot to be hopeful about," she said. "She represents that maybe there is a light at the end. And when you take people on the low points of your journey, it's cool to let them be a part of the joy. Plus, she's really cute." You can't disagree with that. Just look at that little girl's super adorable face.

Although Mother's Day might be a super emotional day for Union, rest assured that she will be able to look forward to this day for the rest of her life — especially since Kaavia is now in it.