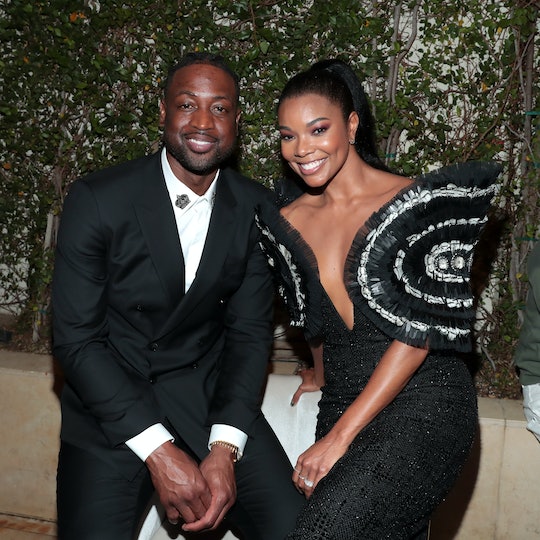 Gabrielle Union Relied On An "Underground" Fertility Community While TTC

When it comes to building a family, so many of us grow up believing that it's a relatively straightforward ordeal: you want a pregnancy, you get a pregnancy, you deliver a healthy child according to your birth plan. The reality is, though, that this is so often not how it goes, and talking more about the different ways that families approach conception and birth is a net positive for everyone's expectations. For instance, Gabrielle Union recently shared that her surrogacy journey was supported by an "underground fertility community," and illuminates just how common it is to actually need help with getting pregnant and the support that's out there.

In November of last year, Union and her husband Dwyane Wade welcomed their first daughter via surrogate, according to People. ("Surrogate" was the term reported, but they actually used a "gestational carrier," whom carries the biological child of Union and Wade, as opposed to a "surrogate," who would be donating their own egg as well.)

It's a route that more and more families are being transparent about taking, particularly public figures. Most notably, we know that Kim Kardashian West and Kanye West had their third and fourth child via a gestational carrier, as Kardashian's doctor recommended it was unsafe for her to have any more children, PopSugar reported.

However, in a new interview, Union opened up about how her journey to motherhood went, and why that tight-knit support community is so essential.

“A lot of Hollywood people will make an announcement, like, ‘Our baby arrived via gestational carrier,’ but very few are transparent about the whole process,” she told Shonda Rhimes on Shondaland. “There’s a fertility grassroots underground community: Once you put it out there within your social circle, they’ll find you.”

Union went on to say that network was how she got essential information about everything from doctors to therapies to consultants to acupuncturists. “Once this group of people takes you into their arms, you’re like, ‘Oh, okay! There’s so many of you!’" she explained to Rhimes regarding just how common it is to need extra fertility support, or seek alternative options.

This past Mother's Day, Union even shared a really intimate and special photo with Instagram, in which she and her husband are sitting in the delivery room in scrubs, and her doctor is holding up her daughter for the first time.

Union went on to say that she was sending "so much love" to all those who parent, caretake and raise our kids: mothers, step-mothers, grandmothers, aunties and so on. "Anyone who has taken the time to nurture another living soul. I see you, I gotchu. And to those who have lost their mamas, grandmas, mother figures, sending extra love and light and hugs your way," she concluded.

It's fantastic that Union feels spirited enough to share her journey with others, as there's so much to be learned from it. Namely: there's no one right way to become a parent and start a family, there's a ton of support available to you if you need it, and motherhood is magical, no matter which way you arrive.