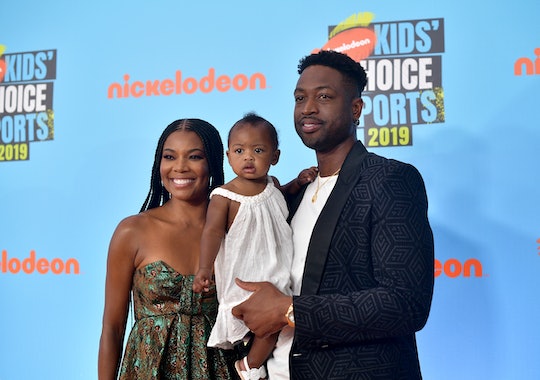 When you're a new parent, every milestone can feel like a huge accomplishment, and that's because it is. Watching your baby go from a tiny infant to a walking, talking, autonomous being is maybe one of the most rewarding experiences you can have. For example, Gabrielle Union's 9-month-old daughter Kaavia is swimming like a pro and the video she shared of the incredible milestone perfectly depicts that "proud mama" moment.

This week, Union, who welcomed her first daughter last year, shared a video of her at swimming lessons, at which her coach tells her to "Go!" and she jumps head first into the water, proceeding to swim with her head underneath. "I don't know how to feel about this at 9 months old. Its wild and I've got permanent proud mama face!" Union shared.

Fans and followers were quick to respond, affirming that Union should indeed be proud. "Like she knew how to take a breath and everything!!! How!!!" one comment read. "I love her confidence," said another. "I love this video!!! She’s so strong!!" model Ashley Graham, who is a friend of Union's, also replied.

Union has been open about her journey into parenthood and now motherhood, sharing the highs and lows that she's experienced along the way.

While it's so exciting to see her thriving as a new mom, sharing glimpses at her life with her daughter, Union previously spoke out about what a challenge it was for her to get pregnant, and why she and husband Dwyane Wade opted to use a surrogate (technically a gestational carrier) to have their daughter, according to TODAY.

In an interview with Women's Health, Union opened up about the apprehension she felt about seeking help for fertility, worrying that those around her would judge her, or misunderstand her intentions.

"There's nothing more that I wanted than to cook my own baby. The idea of (using a surrogate) felt like surrendering to failure," she said. "People want to see the bump, hear that you got hemorrhoids – they want to know you're like them. I was like, 'This is going to seem like the most Hollywood sh*t ever.' … It’s terrifying."

A few months after Kaavia was born, Union shared a behind-the-scenes look at her delivery, noting that there's no one "right" way to start a family (correct) and that every journey is special (also correct). "Every family is unique. How each family is created and comes together is special. Kaavia James Union Wade’s journey into our arms was long and at times brutal," Union wrote on the Instagram video of her and Wade in scrubs, waiting for their daughter. "There were heartbreaks that nearly broke us and streams of tears that turned into raging rivers. And then came Kaavia James. This is our birth journey. Thank you all for the love, support and understanding and all the people who held us up when we lost hope. Watch it with love. Watch it with hope."

Love and hope, indeed, as Union has proven how worthwhile that scary journey has been. Whether it's swimming lessons or photo shoots, it's clear that she's in love with being a mom.