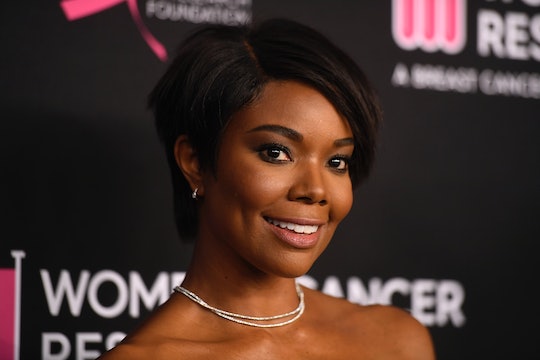 Many parents can't wait to hear their child's voice for the first time, as it's a parenting major milestone. And although most first words are usually the typical "dada" or "mama," it wasn't the case for Gabrielle Union's 9-month-old daughter, Kaavia. Nope, the baby chose a word that hilariously fits her personality instead. If you're in the mood for a laugh today, look no further than Gabrielle Union’s video of Kaavia's first word.

On Tuesday, the America's Got Talent judge took to Instagram to share a video of Kaavia saying her first word, which was apparently very appropriate given her personality — bye-bye. "@kaaviajames speaks!!!! Get ready world. Next stop, #agt judges table! Bye bye," she captioned the funny clip.

Those who are already familiar with Kaavia (please note that she has daughter has her own Instagram handle, and the pics on her page are totally adorable) probably aren't surprised. Kaavia is a master of the side eye and sass, so I can't say I'm shocked she's a fan of the bye bye.

Union agreed with this sentiment in an interview with People, telling the outlet: “I thought saying ‘Mom’ or ‘Dad’ first was sort of natural, but then she started saying ‘Bye,’ which says it all. She’s very much her own person.” True that.

The mom continued, "We say ‘Hi’ and ‘Hey’ so she kinda gets that, she says that pretty okay. But when we leave her, we say ‘Bye-bye,’ and that’s what stuck. And that’s what is super clear. She’s very articulate with the ‘Bye-bye.’"

There's no telling what Kaavia's next words will be, but it won't be surprising if she forms a whole sentence next!

Circling back to Kaavia's sassy attitude, Union joked about it about back in February, telling People: “She looks just like Dad, but I’d like to think the attitude is from me. She will stare into your soul and tell you about yourself through her eyes.” Ha!

Union's husband and father of Kaavia, Dwyane Wade echoed this sentiment, telling Us Weekly: "[She] looks like me, acts like [Gabrielle]. She has a whole personality."

He continued, "She’s very particular about everything just like her mother, very particular, but I love it because she lets you know who she is and what she wants, what she don’t want. It makes it easier for me to be like, ‘Oh, you don’t want that? Cool.’”

In all seriousness, though, Kaavia is too adorable. And many fans are blown away by how sweet she is.

"Awwww. My heart just melted," one person said. "That was sooooo sweet."

Someone else joked: "Kaav will be saying, 'GIRL, BYE' by next week."

Hopefully, Union will keep the videos coming because there's nothing more precious than a baby hitting those major milestones. And it's a sure bet that new mom Union is soaking up her daughter's hilarious personality.