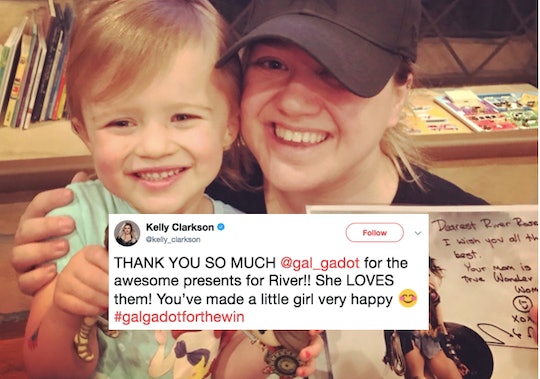 As cliché as it sounds, it's actually true that not all heroes where capes, especially when it comes to motherhood. Yeah, basically all moms are super heroes, something made clear by a certain American Idol alum's latest tweet. Seriously, Gal Gadot sent Kelly Clarkson's daughter Wonder Woman toys for the best reason — and the photo evidence will make you love the actress even more.

On Monday night, Clarkson's daughter, 3-year-old River Rose, was sent a special present from Wonder Woman herself, according to People. Along with two toy figurines of the comic book character, Gadot sent the adorable toddler a signed photo of herself from her box office smash hit. Additionally, Gadot wrote a special note to little River Rose, complimenting Clarkson's mothering skills as well. "Dearest River Rose, I wish you all the best. Your mom is the true Wonder Woman," Gadot wrote.

Clarkson has expressed her appreciation for Gadot and her role in Wonder Woman as inspiring and important for women and young girls at an event in October. And now, it seems as though Gadot has responded to Clarkson's affection and wants to show the singer and badass mom that, while she may love Wonder Woman, being an amazing mother actually makes her a Wonder Woman IRL.

In October, Clarkson and Gadot both attended the Variety's Power of Women event and Clarkson actually got a little starstruck when she saw Gadot sitting in the audience while she was giving a speech. "I am excited," Clarkson said, according to People. "I just saw her. I can’t. She’s Wonder Woman!" But she didn't just gush over how gorgeous and charming Gadot is. Oh no. Clarkson also spoke about how much Wonder Woman meant to her and her daughter. According to People, she explained:

The story of Belle [and] the Beast is a little scary. She was in a dungeon, trapped, and they fell in love. Aurora, she just slept it out! But [my daughter] loves Wonder Woman. She’s 3. I probably shouldn’t show it to her. I know I’m being judged, [but] all the grown-up stuff goes over her head. It’s nice to have this bold, female figure for your girl.

And truly, even if you haven't seen Wonder Woman, the statistics and numbers surrounding it are already pretty inspiring. As Vanity Fair reported, it is officially the "highest-grossing live-action movie directed by a woman," and its impact has been huge. As Fifty Shades of Grey director Sam Taylor-Johnson told Vanity Fair, "We are making progress, but we still have to kick down the doors to get our voices heard and still have to keep fighting for things. With Wonder Woman and the other great films directed by woman, it’s a start, and I’m hoping it will get a little bit better." Seriously, the film has inspired so many women — even 3-year-olds, like River Rose.

Continuing her October speech, according to People, Clarkson went on to explain how happy she was that her daughter loved Wonder Woman as much as she did. She said:

Once she saw the little girl in Woman Woman defend herself and all that she loved, she started acting it out, and I couldn’t have been more proud. You’re a little proud ’cause you’re like, "Aw, you’re cute in the Belle dress." But you’re more proud when she’s like [fighting evil].

It really seems as though Clarkson's many compliments haven't gone unnoticed. Gadot's special gift to River Rose might be correct in referring to 35-year-old Clarkson as a Wonder Woman, but it also proves that Gadot herself possesses the same kindness and compassion as Diana Prince, Wonder Woman's real name.

While River Rose might have been waiting to get some awesome gifts from Santa Clause, it seems as though Wonder Woman has delivered early this year in the coolest way possible.