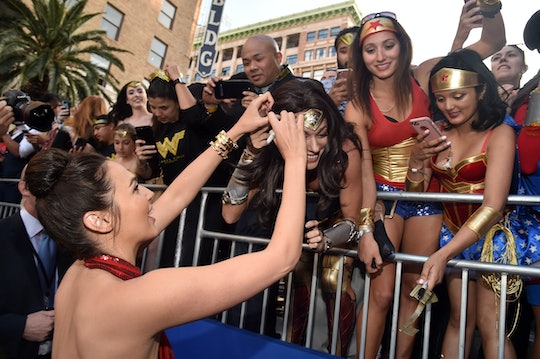 Wonder Woman has been such a huge hit that it feels like everyone is clamoring to get to know its star, Gal Gadot, a little bit better these days. Along with being an actress, a mother, and a wife, Gadot is also a feminist. And there are tons of Gal Gadot quotes about feminism to prove it.

Obviously, the woman who plays Wonder Woman would be a feminist (or rather, should be), and Gadot doesn’t seem like the kind of person who does things halfway. It was about time the world got a Wonder Woman movie, too, and the fact that someone like Gadot was picked to play the lead just makes things that much more perfect.

Just in case you thought that women weren’t into superheroes or DC comic books (and why would you think that?), female fans came out in droves to see the Wonder Woman. The movie had what Variety described as a “massive” opening weekend — beating out Tom Cruise’s The Mummy with over $100 million worldwide. Warner Bros. distribution chief Jeff Goldstein said of the response to the film, “Globally this property has just resonated with fans. There’s something iconic about Diana and the story of Wonder Woman that’s hitting the zeitgeist perfectly.”

With its opening weekend, Wonder Woman is also slated to beat out other equally massive films like Iron Man and Thor, which are both led by men. Clearly, girl power is stronger than steel (or iron, at least).

Need more proof that the film is the perfect example of badass womanhood? Here are some examples of its lead actor, Gadot, proving she's the real deal, as far as cool, feminist power is concerned.

At the end of the day she’s the most-powerful warrior. Strength and power are usually qualities that are being shown by men in films. It was very important for us to give her feminine qualities, as well, so she’s very, very warm and she’s full of compassion and she’s very loving.

On Wanting To Play Strong Women

Gadot said in an interview with Refinery 29:

Eight years ago when I became an actress I used to travel to Los Angeles and take general meetings with different producers, writers, and directors, and they kept on asking me the same question over and over again, "What’s your dream role?" I kept on saying, "I’m open to all genres as long as the story is interesting enough, but if you really ask me, what would I like to do is to show the stronger side of women, because I feel that there’s not enough stories being told about strong women, independent women".

I'm pretty sure she found the perfect role, everyone.

On Being A Role Model

I feel very proud that finally this movie is being made because all of the guys, all men, all boys, always had a figure to look up to. Whether it’s Superman or Batman or Spider-Man or whatever it is, they always had heroes to look up to, and for girls it’s always the princesses who are being saved, who are being passive. Finally, [there's] Wonder Woman. She’s fierce, she’s proactive, she believes in herself, she believes she can do everything, and that’s a true woman to me.

On Relating To Diana

It’s very easy to relate to her. She has the heart of a human so she can be emotional, she’s curious, she’s compassionate, she loves people. And then she has the powers of a goddess. She’s all for good, she fights for good, she believes in great. I want to be her.

Gadot also told Entertainment Weekly that women, believe it or not, can be lots of things:

Diana has always been a role model for women, so it's really something to see someone who believes in Wonder Woman's feminist values bring her to life on the big screen. Bless you, Gal Gadot, forever and ever.