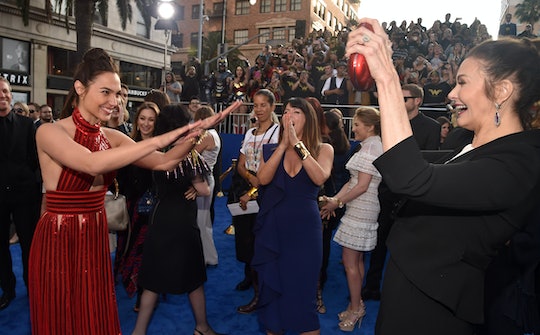 Unless you've been living under a rock recently, you've likely seen, heard, or (more likely) been bombarded with talk about the new Wonder Woman movie. Obviously, most new movies undergo their fair share of enthusiastic promotional chatter, but it seems like all the fuss surrounding Gal Gadot's newest role has been pretty extraordinary. Then again, isn't the new movie, which had the highest-grossing opening weekend for a woman-directed film, something to talk about? Seriously, rest assured that all the press surrounding Wonder Woman and its star is completely justified — even just looking at Gal Gadot's quotes about Wonder Woman will totally inspire you and remind you why everyone is so in love with the film (and Gadot herself).

Since the film's premiere on June 2, Wonder Woman has brought in over $400 million worldwide, but that's hardly its biggest accomplishment. The movie also serves as an important reminder for women and girls everywhere that their stories matter, and that they can have just as much power as men. And Wonder Woman herself, Gadot, has reiterated that sentiment time and again these past few weeks. Of course, Gadot is basically Wonder Woman in her own right: She was not only pregnant while filming parts of the action-filled movie, but she also recognizes the platform she's been given, and intends to use it for the best purposes.

Below are a few of her best quotes about the film — proof that, if you haven't already done so, you need to see it immediately.

At the very start of her acting career, Gadot made it clear that she had no interest in portraying women as weak — and if she approves of her latest character's power, that's saying something. "Whenever I met with producers, writers, or directors, I said I wanted to portray a strong, independent woman," she told Glamour. "Cut to Wonder Woman." (Obviously, being picky has worked out for her.)

In that same interview with Glamour, Gadot spoke of Wonder Woman's most important qualities and said she wanted to make them very clear to the audience. "It was important for me that we show how independent she is," Gadot explained. "She is not relying on a man, and she's not there because of a love story. She's not there to serve someone else."

She Loves That Diana Feels Human

Speaking to Entertainment Weekly, Gadot talked about how easy it was for her to relate to Wonder Woman's character, Diana Prince:

I feel like Diana is really accessible. It’s very easy to relate to her. She has the heart of a human so she can be emotional, she’s curious, she’s compassionate, she loves people. And then she has the powers of a goddess. She’s all for good, she fights for good, she believes in great. I want to be her. And in Wonder Woman, she has this naiveté in her. It isn’t stupid, it’s magical. I would want to be naïve like that again.

She Totally Gets The Film's Importance

While promoting the new film, Gadot sat down with The Herald Sun to discuss Wonder Woman, and how she feels about the film finally being made 75 years after the character's creation:

She's Ready To Take Over The World

"I feel that I’ve got the opportunity to set a great role model for girls to look up to a strong, active, compassionate, loving, positive woman and I think it’s so important," Gadot said in the aforementioned Entertainment Weekly interview. "It’s about time that somebody will do that and I’m very privileged and honored to be the one."