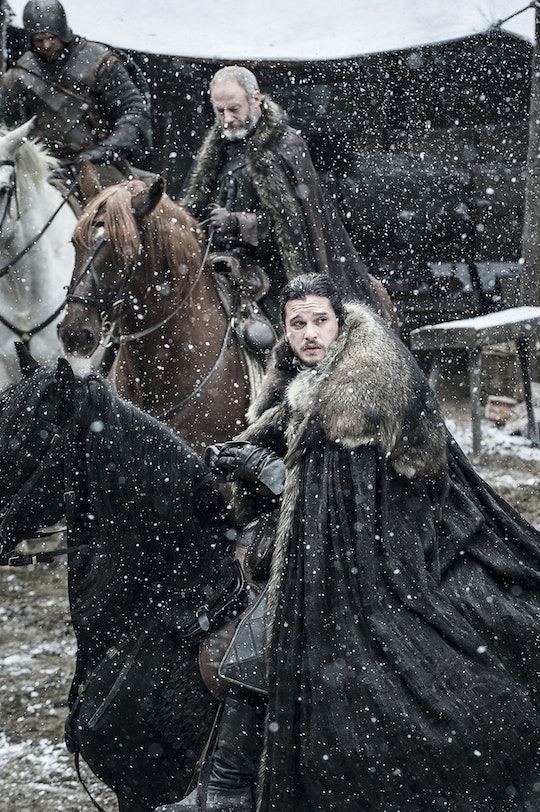 'Game of Thrones' Cut This Crucial Character From Episode 2

Jon Snow received some major news in Game of Thrones Season 7 Episode 2, "Stormborn." A letter from Tyrion Lannister urged Jon to travel to Dragonstone to meet with Daenerys, which would require leaving the relative safety of Winterfell behind. Nearly everyone weighed in on Jon's decision, from his sister Sansa to advisor Davos to true queen of the seven kingdoms Lyanna Mormont. But when Jon made up his mind to go and said his goodbyes, there was one conspicuous absence. Game of Thrones cut a crucial character from Jon Snow's departure.

And that character was Jon's direwolf Ghost. Ghost has been Jon's constant companion ever since the numerically perfect litter of wolf puppies was discovered in the pilot episode. He has supposedly travelled north and south with Jon, was close by when Jon was killed and when he was resurrected. But sometimes you'd never know it, because Ghost is often nowhere to be seen. In fact, the last time he showed up on screen might have been when Jon came back from the dead – which was an entire season ago.

Luckily writer and producer Bryan Cogman took to Twitter to shed a little light on the situation. Apparently there was supposed to be a scene involving Ghost in "Stormborn," but it just didn't make the cut. Fans will just have to imagine what the heartfelt goodbye between man and wolf must've looked like.

Cogman didn't elaborate on the reasons behind nixing the scene, though it could have been a technical issue rather than an artistic choice. Perhaps the episode was too packed already and there simply wasn't enough time. High energy seaside battles can really eat up the budget, so perhaps they ran out of money before adding in the giant CGI wolf. Whatever the reason, Ghost was M.I.A. in "Stormborn" and it quickly became clear that this wasn't the first time Ghost lost out on the spotlight.

Ghost was also cut from some scenes in Season 6, particularly in "The Battle of the Bastards." Though one would have expected Jon's loyal wolf to be by his side during the big fight, but issues of budget meant that Ghost lost out to Wun Wun the giant. The episode's director, Miguel Sapochnik, told Business Insider, "[Ghost] was in there in spades originally, but it's also an incredibly time consuming and expensive character to bring to life. Ultimately we had to choose between Wun Wun and the direwolf, so the dog bit the dust."

Ghost is one of the few direwolves left on Game of Thrones, so it's disappointing that fans catch a glimpse of him so rarely. Direwolves are apparently much like 1990s supermodels; they won't get out of bed for less than ten grand a day. Here's hoping Ghost's demands can be met before the show finishes for good so he can squeeze in one final appearance.