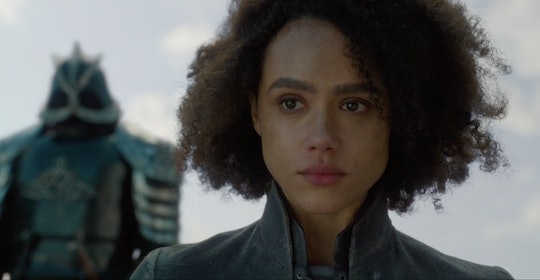 Game of Thrones is facing some heat for its treatment of its female characters in the first episode following the Battle of Winterfell. From Sansa attributing her strength and cunning to being abused at the hands of men to Brienne sobbing over a boy while wearing a housecoat outdoors, the show made what fans believed were some considerable missteps. But Game of Thrones also killed off its only black woman in episode four, which, considering how its characters of color were treated in the Battle of Winterfell, doubled down on the same disappointing race tropes the show has always struggled with.

Missandei of Narth, Daenerys Targaryen's most trusted advisor since Season 3 (and as much of a best friend as the Dragon Queen allows herself to have), met a grisly end in "The Last of the Starks." After a devastating ambush at Dragonstone, Missandei found herself a prisoner of Queen Cersei and the ultimatum that lay before the warring mad queens was apparent: either Cersei bend the knee to spare King's Landing from Dany's sole surviving dragon, or Daenerys bend the knee and spare her friend from execution. Obviously, neither ruler backed down and Missandei lost her head for it, with Daenerys and Grey Worm helplessly watching.

Just before Missandei was beheaded by The Mountain, Cersei offered her a chance to voice any final words and she had just one: "Dracarys." Fans may recognize it as the command Dany gives her dragons right before they light up whatever enemies dare cross them. But in high Valyrian, it translates (loosely) to "burn this sh*t to the ground." Whatever part of Daenerys was still struggling with the decision to become Queen of the Ashes seemed to die in that moment, with her best friend giving her permission to become the thing she had been trying so hard to avoid.

Fans have accused the show, among other things, of falling into an old comic book trope known as "fridging," in which a female character is killed off just to serve as motivation for a male character to rage-spiral into a revenge sequence. Even though Daenerys is a woman, the basic structure of fridging still applies to Missandei's death. Her death was used as a plot device to move Dany's storyline along, not in service of her own, fully fleshed out character.

Also invoking fan outrage is the fact that Missandei died in chains, an element the show drew heavy-handed attention to with lots of lingering handcuff shots. Daenerys was lauded as the breaker of chains and for a freed slave to go out the way Missandei did — especially with all the other problematic factors in play — rightfully struck a nerve with fans.

It seems like the show is a real battle of two mad queens now, which in itself, is not necessarily what its viewership was hoping for. But disposing of its sole black female character in such a ruthless way — especially so soon after she found her bliss with Grey Worm and made a plan to move back to Essos after the war — was beyond the pale.