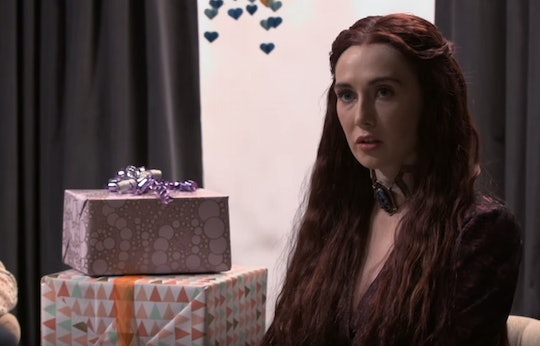 One thing I never thought I would see? Game of Thrones characters placed in modern-day, planet Earth social situations. They may be really good at killing, ruling, and navigating convoluted family drama (ahem, incest, patricide) in Westeros, but in a recent video, Seth Meyers proved that one of our favorite Game of Thrones characters would be bad — really bad — at navigating today's social situations. Seth Meyers and actress Carice van Houten collaborated on a short clip where van Houten's on-screen persona, Melisandre, attended Seth Meyers' baby shower. The result — whether you're a GOT fan or not — was hilarious.

Late night show host Meyers has already proven himself to be a fan of the HBO fantasy series before: in the past, he interviewed writer George R. R. Martin (and asked to be knighted by him) and moderated a Game of Thrones cast panel at Comic-Con. He then brought Kit Harington, who plays the long-suffering (and rather dead) Jon Snow, onto the show for a fantastic dinner skit. As much as I may love now, though, he was completely overshadowed by Carice van Houten's skit with Meyers, which aired Thursday night. In the skit, van Houten got into character as Melisandre to show the world what a baby shower would like if the reigning queen of GOT evil were in attendance.

It's hard to put into words. I wouldn't ever want Melisandre at my own baby shower, but I'd want to be at every single baby shower Melisandre attends, because that clashing of worlds is comedy gold. Here's a few of the highlights:

When Melisandre Is Cheerful, Because She Can Be Cheerful, You Know

When She Gives Meyers Some... Uh, Questionable Baby Gifts

Guys, it's not just a dagger. It doubles as a rattle, too.

When She Tells Meyers She Wants His "King's Blood"

Ah, a classic Melisandre move. And yes, Meyers is king of comedy.

When She Makes A Very "Gouda" Joke

When One Attendee Annoys Her, So She Takes Matters Into Her Own Hands

Let's be honest: every baby shower has that one person who's just a wee bit over the top. Melisandre deals with that attendee in her own... um, unique way.

Melisandre's also dispenses some questionable child-rearing advice, which I would likely never share with an expecting friend. My personal favorite? “Clutch your child close to your breast, woman, for the night is dark and full of terrors.” She then recounts her fun experience giving birth to a shadow demon child. Meyers eventually pulls Melisandre aside and says, "You always say you don't have any female friends, and this is why."

Watch the full skit below:

A cute aside to this skit? Meyers' wife, former SNL writer Alexi Ashe, joined the cast for this one, and she and Meyers are expecting their first child. How awesome/terrifying would it be to actually have Melisandre in full costume at your baby shower? I'd maybe skip the cheese platter offering.