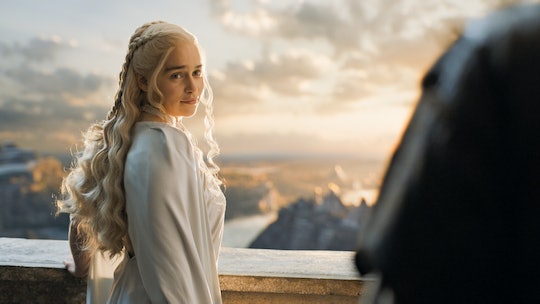 'Game Of Thrones' Script Accidentally Leaked By Actor Online, To The Joy Of The Entire Internet

Here’s what we knew about the sixth season of Game of Thrones before today: not much at all. So, when (reportedly) new cast member Elie Haddad accidentally Elie Haddad accidentally leaked a Game of Thrones script on his Instagram page today, fans drank it up like Cersai and a goblet of wine. Even after Haddad deleted the post, devotees used a tweeted screen-cap to analyze the who, what, where and whys that are sort of visible in the one-page text. (Warning: Fifth season and potential sixth season spoilers ahead.)

Because the script is in an awkward position on an iPad, deciphering the leaked GOT dialogue isn’t actually such an easy task. But with months until the next season premieres and no new book from George R.R. Martin to read, fans on the Watchers On The Wall page used their spare time and photo manipulation skills to tackle the task. Their best guess is that the conversation is happening between two Dothraki, who encountered Daenerys and Drogon in a field at the end of the fifth season after the pair fled a hostile Mereen — and it doesn’t seem like the Dothraki are showing the Khaleesi much more hospitality.

"I bet she gets nice and pink when you pinch her."

But there does seem to be hope for the Mother of Dragons: As another eagle-eyed commenter pointed out, it looks like there is some mention of Daenerys’ aide, Missandei. It just isn’t clear whether it says she’s “disguised” or “digested.” And it really could go either way because, as we know, no one is safe in Martin's universe. We’ll just have to wait until next spring to learn what really goes down between Daenerys and the Dothraki.