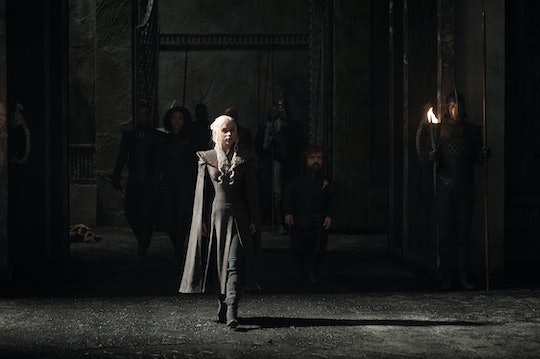 The penultimate season of Game of Thrones is set to premiere on July 16, and more details are emerging as the premiere gets closer. Summaries for the first three episodes of the seventh season were just released, and the clues from the Game of Thrones Season 7 episode descriptions are fascinating — if vague — and hint at what's to come.

The titles of the episodes alone are exciting. The first episode of Season 7 will be called "Dragonstone," which refers to the castle that was the former seat of House Targaryen before Robert Baratheon took over the throne. Robert handed Dragonstone off to his brother Stannis, but Stannis' death put it back on the market. Now, as per the episode title and description, it seems Daenerys returns to the fortress that belonged to her family for centuries. It was also where she was born, so she truly is coming home. It proves she's one step closer to regaining her birthright.

The rest of the description for Episode 1 is a lot less revealing. It seems Jon is continuing his rule in the North by making sure all of their defenses are in place for the coming war (both against the White Walkers and against Cersei, the ruling queen). Cersei attempting to "even the odds" could mean anything without more context, but knowing her it means something violent. She could be taking even more revenge against her presumed enemies.

The title of the next episode, "Stormborn," is another reference to Daenerys, one fans have probably heard mentioned right before she starts reeling off her many titles. She earned the name "Stormborn" because she was quite literally born in a storm at Dragonstone. That could indicate that her birth or birthright comes into play while she settles in at her new (old) home; perhaps there will even be a flashback to her birth?

The episode description itself makes it clear that this season isn't beating around the bush. Things are going to get intense fast. Daenerys will be welcoming a houseguest (Jon Snow?) before she's even unpacked the good wine glasses while Tyrion checks a few things off her To Do list – namely, the conquest of an entire country. You know, just something to figure out over brunch.

Meanwhile, poor exhausted Jon is apparently going to have even more trouble to deal with when a revolt breaks out. That's definitely intriguing, especially because so many Northerners rallied behind him in the Season 6 finale. It's possible one of the less enthused families, like the Karstarks, could be rebelling. But it's also possible that Littlefinger could be manipulating the situation to his benefit by taking advantage of the growing sibling rivalry between Sansa and Jon to stage a revolt. Especially if Jon is out of the picture for an episode, perhaps because he went to Dragonstone to be Dany's unexpected visitor.

Season 7 Episode 3 is called "The Queen's Justice" and there are really only two characters that could be referring to: Cersei, who sits on the Iron Throne, or Daenerys, who wants that throne. However, the episode summary doesn't make it clear which queen the title is alluding to or what kind of justice they're dishing out. In fact, it makes the episode sound utterly banal.

Daenerys will be holding court in the third episode, which either means she's finally throwing a housewarming party or she's preparing to speak to her people for the first time. She could be inviting other important figures to Dragonstone to rally support, which she definitely needs to do if she wants to succeed.

Elsewhere in the episode, Cersei wants to speak to a manager about a gift she received; the nature of the gift is still unknown, but apparently it wasn't to Cersei's liking. Perhaps someone tries to make peace with her and Cersei refuses, like Euron Greyjoy, who has spoken about his desire to join forces with the queen. It's also possible that her "gift" was a threat, maybe sent by the Sand Snakes or Olenna Tyrell. Either way, Cersei's not on board with it.

That just leaves Jaime, who suddenly realizes he made a huge mistake. (The Lannisters are the Bluths of Westeros: discuss.) There are so many mistakes in Jaime's past that it's hard to narrow this down to just one, but it's heartening that he's making an attempt to grow and change. Baby steps, Jaime.

The descriptions for the first three episodes of Game of Thrones Season 7 are as ambiguous as it's possible to be, but they open the door to all kinds of possibilities.