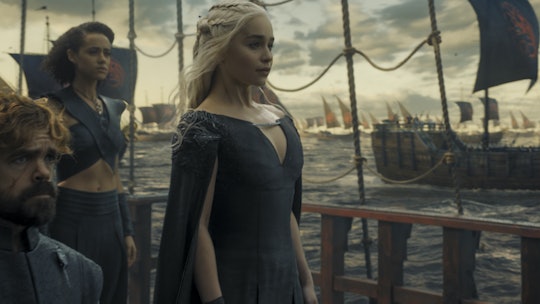 It's been a long and cold winter waiting for Game of Thrones to return, and while we still have a ways to go before our beloved characters of Westeros appear once more on our television screens, at least we can now put a timeline on how much longer we have to go. That's right, my friends — the Game of Thrones Season 7 premiere date has finally been revealed and let me be one of the many to say — it's about damn time.

Word spread that the answer (much like winter) was finally coming after the official Game of Thrones Twitter account posted that they'd be announcing the premiere date on Facebook Live at 2 p.m. ET. And while that brief wait was a cruel form of torture in and of itself (the date wasn't revealed until a huge block of ice melted), it was finally announced that Game of Thrones' seventh season will premiere on July 16, 2017.

Is it as soon as I would like it to be? Of course not, but if that's what we're gaging this by, the series would be returning within the hour. (Hey, I'm not exactly known for my patience, OK?) But it's still nice to know how much longer we'll have to go before Dany & Co. fly back into our lives. (Get it? Because of the dragons? Did you get it, guys?)

But just in case that alone isn't enough to quench your GoT thirst (if something like that is even possible), the network has also released an amazing teaser trailer that proves war isn't just coming... it's here:

Prior to these two epic pieces of intel, the series has also debuted a Season 7 poster to obsess over from now until the end of time. While a majority of the image is made of snow and ice, you can also see fire cracking through the cold exterior, proving that the fire and ice aspects of this story are about to collide after years and years of build up.

The fire, obviously, represents Dany and her dragons making their way to Westeros, while the Night King and his chilling army serve as the ice that's make their way from the Wall. In other words, sh*t is about to go down in this upcoming season and I could not be more excited (or terrified) for what's to come. Let's just hope that the remaining months we have in a Game of Thrones-less world will go by even faster than expected. It may be summer for us — but winter is coming to Westeros and these characters will never be the same.