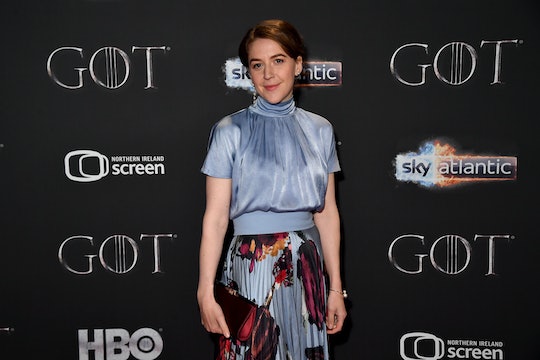 'Game Of Thrones' Star Gemma Whelan Breastfed In Between Scenes, & The Photo Is So Badass

The ladies of Game of Thrones are strong on and off screen. No episode highlighted female strength more than Season 8, Episode 3, titled "The Long Night." The ladies of the Seven Kingdoms dominated, but it was a behind-the-scenes moment that showcased a unique kind of girl power HBO could never deliver to fans. Game of Thrones star Gemma Whelan's on-set breastfeeding photo proves moms can do anything.

The actress, known for playing Yara Greyjoy in the popular fantasy series, posted a photo of herself nursing her daughter, born in 2017, according to Elle UK. In the caption, Whelan joked, "Enjoy tonight's episode guys...! Yara's got some big news..." She later assured fans in the comment section that the caption was "Just a tease." The image gave fans a glimpse into Whelan's "actual life on set between whatever we actually were filming." In the photo, the 38-year-old British actress and be seen sporting full makeup, meant to look like dirt and grime, and her Yara outfit, which consists of a dark tunic and her signature half-up, half-down hair. The baby can be seen wearing and adorable cupcake onesie. Fans totally loved the photo, and flocked to the comments section to let Whelan know just how awesome it was. The picture racked up nearly 108,000 likes.

"YOU ARE AMAZING MAMA!! wonderful picture!! Working mother, nursing her baby while in between battle scenes," a third fan commented.

Whelan recently spoke with Good Morning Britain about bringing her daughter to work with her. During the broadcast, the actress admitted that she told "my baby daughter," how the show ended, noting that the child is unable to speak, so her secret was perfectly safe. "She can't tell anyone," Whelan joked at the time. She also revealed that her baby girl was there through essentially all of filming on Season 8 so she was able to care for her.

"She was very little, she came on set with me for the whole thing because I was breastfeeding her, so in between takes I was taking care of her," Whelan said.

The actress added that it wasn't easy to breastfeed in her Yara costume. She told Good Morning Britain viewers she was pretty well tied into the armor, and struggled to make it work. In the end, she figured it out though — as moms always do.

"I'm really sort of tied into my armor. It's quite difficult to get to yourself, let's put it that way," Whelan shared with Good Morning Britain audiences.

Whelan may have struggled to keep the Game of Thrones ending a secret, but she's had no problem staying tight-lipped about her daughter. Information about the child's name, and exact birth date, were not immediately available. Whelan's daughter is believed to have been born in October 2017, according to Heart.

Game of Thrones fans can't wait to see more of Yara in the final three episodes of the show. Many are also hopeful they'll get to see more of her sweet baby girl on Instagram.