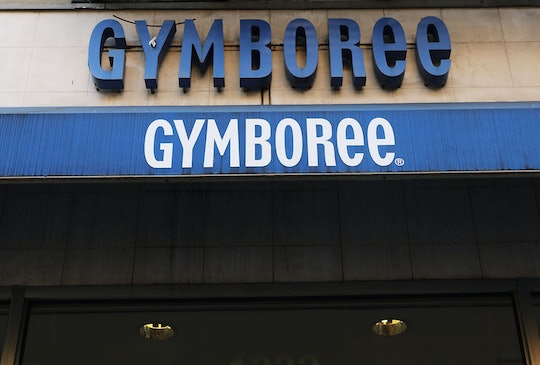 After Gymboree filed for bankruptcy in January, fans of the children's clothing brand were disappointed to learn that the stores would be going out of business. After all, finding a children's clothing brand you love and trust is kind of hard. But, there is some good news. Clothing stores Gap and Children's Place are reportedly acquiring Gymboree's brands, which could have some parents very happy.

Never fear — Gymboree will still live on in some way or another. But, it's a little unclear what that way will be. Over the weekend, the Wall Street Journal reported that the Children's Place will reportedly acquire the "copyrights, internet domains, trademarks, and customer related data" associated with Gymboree, if the transaction is approved in bankruptcy court, according to USA Today.

And if shoppers loved the Janie and Jack clothing line in Gymboree stores, they could be in luck. Gap Inc is reportedly set to acquire the Janie and Jack line along with its online business, according to USA Today. Gap Inc. told Romper:

"We are excited about the potential opportunity to acquire Janie and Jack — a leader in children's specialty retail. We believe this transaction will provide Gap Inc. with the opportunity to expand our base in a desirable category with a loyalty brand following."

But, it might be a while before people find out what the Children's Place will do with Gymboree's (and sister brand, Crazy 8) trademarks and internet domains. And its just as unclear when people will be seeing the familiar styles from Janie and Jack show up in Gap stores (or if they will show up at all). A representative for the Children's Place has not yet responded to Romper's request for comment.

But this was expected. When Gymboree filed for bankruptcy at the beginning of the year, they announced that they would sell Janie and Jack, their "high end line," to potential buyers, according to CNBC. And this is good news for the hundreds of people who have been so sad to hear about Gymboree stores going out of business.

After the bankruptcy filing, the store announced that they would be closing all of their stores across the United States, according to ScaryMommy. And two years before this, in 2017, the store closed down 300 stores across the nation, according to USA Today. This is why people have seen everything on extreme markdown in their Gymboree Stores. They're getting rid of all of their merchandise until it is gone for good.

Kids can be so particular about their clothing (especially when they pick out their own outfits), so it makes sense why some parents might have been a little upset when Gymboree first filed for bankruptcy.

However, it's unclear when Gymboree stores will be closing their doors for good, according to Fatherly. And while no one wants to see these stores go out of business, it is the perfect opportunity for parents to stock up on their favorite items for a lot less than what they'd be paying normally.

If there is not a Gymboree store near you, there is still a lot of merchandise for sale on Gymboree's website. And everything is currently 60 percent off, until the store permanently closes its doors — whenever that may be.

Although it will be a sad day when that day comes, this reported news could be good news for loyal Gymboree shoppers.