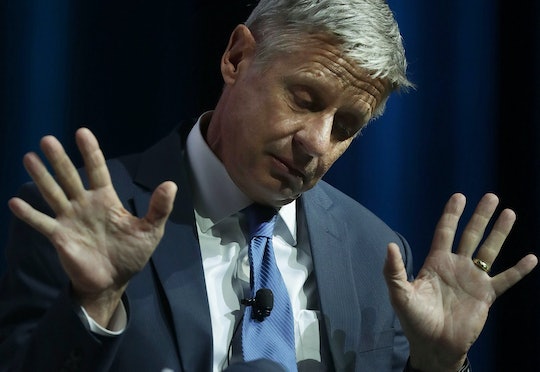 Gary Johnson Asked "What Is Aleppo?" On Live TV, & The Internet Can't Handle It

Gary Johnson is the Libertarian candidate for president, running along with former Massachusetts Gov. Bill Weld. Republicans had hopes Johnson and Weld would serve as a more experienced, better informed alternative to GOP candidate Donald Trump. This morning many of those hopes that the Libertarian ticket could become a viable alternative for conservatives were dashed on MSNBC's Morning Joe when Johnson asked "What is Aleppo?" on live TV.

Johnson was asked a pretty straight forward question by Mike Barnicle about what he would do about the deteriorating situation in Aleppo, a major Syrian city caught in the midst of the country's deadly civil war. In response, and without a hint of realization of how huge a misstep he was making, Johnson, a former New Mexico governor responded by asking, "What is Aleppo?" Barnicle at first seemed to think Johnson was trying to be funny. "You're kidding?" Barnicle said, at which point Johnson made clear that we was not, in fact, kidding. He truly didn't seem to have a clue about what Barnicle was referring to. The Johnson campaign hasn't responded to Romper's request for comment on the Aleppo misstep.

“Aleppo is in Syria," Barnicle told Johnson. "It’s the epicenter of the refugee crisis.”

"Got it. Got it," Johnson said before launching into a description of his Syria policy, which included, "joining hands with Russia to diplomatically bring the civil war to an end."

You have to see the exchange for yourself to believe it.

The blunder comes at a terrible time for Johnson, who is trying to make it to the debate stage along with Trump and former Secretary of State Hillary Clinton. According to the New York Times, a recent Pew poll found Johnson has the support of 10 percent of registered voters. Johnson was hoping to grow his support to hit 15 percent, the number required in the polls to let him join the presidential debates. Johnson got a bit of a boost from former GOP nominee Mitt Romney, who has advocated for Johnson to be included in the debates as a Trump alternative, although he stopped short of offering Johnson his full endorsement, according to the Washington Post.

But it's hard to imagine Johnson convincing voters he's got the chops to be Commander in Chief without a basic recall of world geography, not to mention foreign policy issues. The blow back from Johnson's Morning Joe appearance was immediate.

Conservative talk radio host Hugh Hewitt tweeted that he talked to NBC journalist Chuck Todd about the on-air blunder, which he categorized as a "campaign killer."

Johnson is trying to explain the blunder with this statement from his campaign:

This morning, I began my day by setting aside any doubt that I’m human. Yes, I understand the dynamics of the Syrian conflict -- I talk about them every day. But hit with 'What about Aleppo?', I immediately was thinking about an acronym, not the Syrian conflict. I blanked. It happens, and it will happen again during the course of this campaign. Can I name every city in Syria? No. Should I have identified Aleppo? Yes. Do I understand its significance? Yes. As Governor, there were many things I didn’t know off the top of my head. But I succeeded by surrounding myself with the right people, getting to the bottom of important issues, and making principled decisions. It worked. That is what a President must do. That would begin, clearly, with daily security briefings that, to me, will be fundamental to the job of being President.

It's hard to imagine this will do much to curb the rampant criticism of Johnson's knowledge of foreign affairs. It might not be reassuring to voters that a presidential candidate is waiting for security briefings to get up to speed on foreign policy issues as pressing as the Syrian civil war, but voters will have to make that determination for themselves.