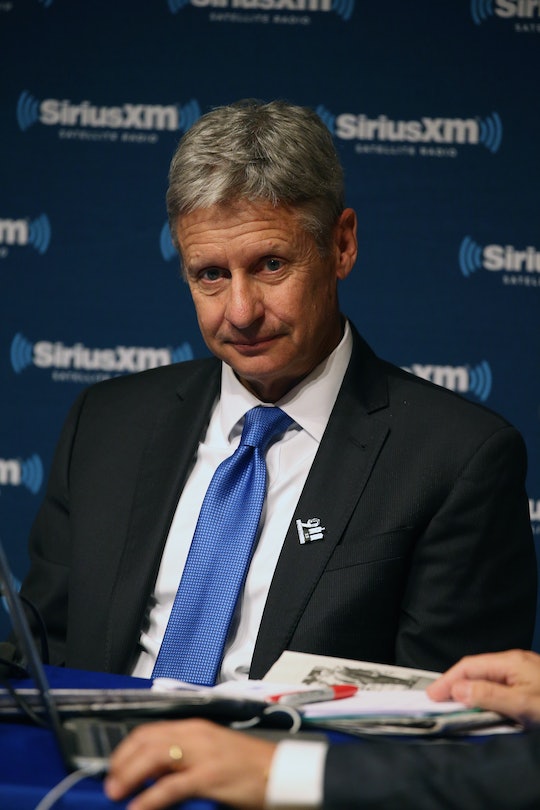 Oh, Gary Johnson. It's been a rough few week for the Libertarian presidential candidate, whose recent downward trend in the media began when he first asked "What is Aleppo?" That spiral continued when Johnson couldn't name a foreign leader he admired, and he didn't exactly help matters when he told MSNBC on Tuesday, "The fact that somebody can dot the Is and cross the Ts on a foreign leader or a geographic location then allows them to put our military in harm's way." Considering all of Johnson's recent comments, some might be wondering: does Gary Johnson have foreign policy experience?

It's a fair question, considering that an important part of being president is playing nice (or, you know, not-so-nice) with other foreign leaders — and many took Johnson's comment on Tuesday as a way of saying a lack of geographical knowledge is a good way to prevent foreign invasions. Whether that's what Johnson meant or not, the two-term Governor of New Mexico does have a fairly straightforward approach when it comes to foreign policy, according to his campaign website:

We should not use our military strength to try to solve the world’s problems. ... We have enough problems to solve right here at home. As President, Gary Johnson will move quickly and decisively to cut off the funding on which violent extremist armies depend. He will repair relationships with our allies. And he will only send our brave soldiers to war when clearly authorized by Congress after meaningful, transparent deliberation and debate.

When it comes to actual experience in foreign policy, Johnson arguably hasn't had much. He's served as the governor of New Mexico twice, making him fairly experienced when it comes to signing bills into law, convening state legislature, and influencing state policies — effectively acting as president to a smaller section of the United States. Governors frequently host foreign dignitaries (or those from other states), though, meaning Johnson has likely dealt with foreign dignitaries visiting New Mexico.

When one looks at his campaign website, Johnson does argue for some valid — and interesting — points. He suggests scaling back on using military force abroad, and "he will only send our brave soldiers to war when clearly authorized by Congress after meaningful, transparent deliberation and debate." He also believes in making it "simpler and more efficient" to enter the United States legally when it comes to immigration.

Johnson does seem to have some solid opinions when it comes to foreign policy — but if he wants to win voters over, he's going to have to find a better way to articulate those opinions.