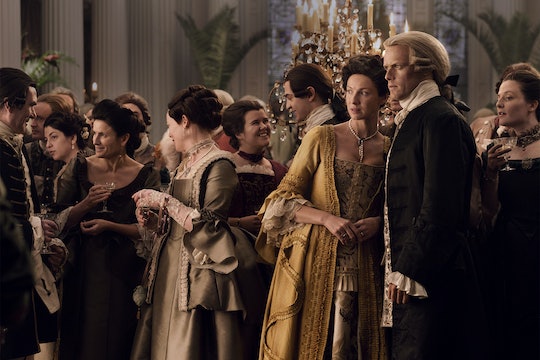 A Fan Favorite Character Has Returned To 'Outlander,' So Get Ready To Lose Your Mind

You didn't imagine after having been discussed this much that Geillie was really gone forever did you? In the penultimate episode of Season 3, Geillis Duncan returned to Outlander and she's even creepier than when she was initially introduced in the first season of the series. Honestly, if I was Claire I'd be a little more hesitant to call this particular woman my friend. Sure, she saved her from being burned as a witch that one time, but she's also got a pretty serious murder habit and that tends to be a deal-breaker for most friendships, in my opinion.

Episode 12, entitled "The Bakra," opens with Young Ian, who hasn't been seen since he was snatched off of Silkie Island while searching for buried treasure. Poor Ian has his treasure box taken from him, then, once in Jamaica, is thrown into a cave with two other boys who warn him of The Bakra. When Ian is taken to her, this lady turns out to be none other than Geillis Duncan herself, taking a very casual blood bath (NBD). She claims it's just goat's blood and she does it too keep her skin young. I've seen some weird beauty regimens in my day, but this one is definitely the ickiest. In fairness, her skin really does look fantastic for being around 50 years old.

After serving him some truth-tea — literal truth-tea that is — Geillis extracts from Ian the fact that his uncle has one of the sapphires she's missing from her treasure box and that his uncle is Jamie Fraser, which of course Geillis finds very interesting. She then explains that she seduces virgin boys because virgins are "powerful," but then discards them once she no longer has a need for them. Ian tells her he's not a virgin but Geillie seduces him anyway because he's there and "even better." Outlander is equal opportunity when it comes to sexual predators apparently.

Unfortunately, there's no word yet whether or not Ian survives his encounter with Geillie, because the next time she appears is at the big party at the governor's house (hi, Lord John Grey!). She tells Claire she'll do anything she can to help find her errant nephew, conveniently omitting the fact that she basically just ate the kid for breakfast. Claire figures out that Geillie was lying upon discovering that Ian was taken to a place owned by someone called Abernathy, which just so happens to be Geillie's last name these days. Claire seems shocked that Geillie would lie to her but honestly — come on, girl. You know better.

It turns out that, as always, Geillie is obsessed with a liberated Scotland, and has been using the talents of poor Margaret Campbell, who has visions, to find out exactly when Scotland will be free. Now with Geillie returned and only one episode left of the season to tie up all these loose ends, there are a few ways this can go. However most of them lead back to Claire's bestie in the 20th century, Joe Abernathy. Abernathy is, as we just learned, Geillie's newest last name. Perhaps Joe is descended from one of the plantation's many slaves. Then again, Abernathy is a fairly common name so maybe not.

Another thing that's been brought to mind is the 200-year-old skeleton of a white lady that Joe showed Claire back in 1960s Boston. Seeing as there are several books after the third installment in this series, it's pretty safe to assume that the skeleton is not Claire's. Could it be Geillie's? Or perhaps it belonged to someone else. Also recall Margaret Campbell's prediction that Claire would find herself in danger in a place called Abandawe. This dark place was also mentioned by Claire's savior in the previous episode, the pot-addled priest obsessed with his goats.