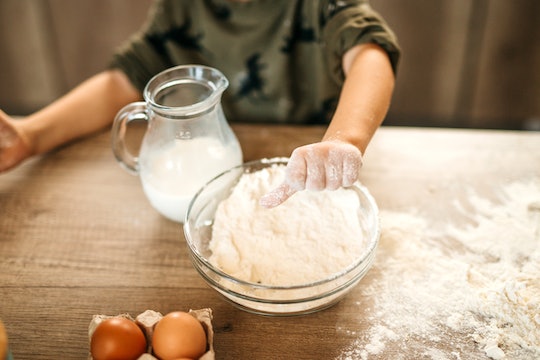 General Mills Expands Its Flour Recall, & Here's What That Means

After more people in several states developed Shiga toxin-producing Escherichia coli — better known as simply, E. coli, General Mills has expanded its recall of bagged flour. So far, 46 people have been sickened in the outbreak, according to the Centers for Disease Control.

On Monday, General Mills released a statement saying it would be voluntarily increasing the scope of its initial recall from May 31, 2016, which included several varieties of bagged flour as well as popular Betty Crocker cake mixes.

Of the 46 people who have had confirmed cases of E.coli linked to flour, 13 have been hospitalized and one person developed a condition called hemolytic uremic syndrome, a serious complication of E.coli that can lead to kidney failure, according to the CDC.

When the illnesses were first reported, they were linked to raw cookie dough, a topic of hot debate with moms for decades. When you were a kid, did your mom let you lick the spoon and bowl when you made cookies? Did she make you wash your hands after every stir and wouldn't let you have a cookie until they were absolutely done? Both schools of thought have long depended on the idea of developing not E.coli, but salmonella — and not from flour, but eggs.

How E.coli Makes You Sick

Both E.coli and salmonella are pathogenic bacteria that live in all sorts of environments: animals, plants, food — even on us! Exposure to these bacteria is part of everyday life. Everyone has, at one time or another, had a type of E.coli or salmonella bacteria hanging out in their intestines. Sometimes they aren't harmful at all and you wouldn't know they were ever there — but sometimes you get sick, usually with a bout of "food poisoning" or the "stomach flu." For the most part, these illnesses aren't very serious bouts and after a few days you're up and at 'em with no longterm health effects.

For people who don't have hearty immune systems — like your friend's new baby or your 90-year-old grandma — infections with E.coli can be serious, and that's why companies like General Mills take these types of recalls so seriously.

E.coli can start making you sick as soon as one day after exposure, but some people might not begin to show symptoms for a week. The incubation period is typically 3-4 days for E.coli.

Most E.coli infections show up like run-of-the-mill stomach bugs: bad stomach cramps, diarrhea and vomiting, and sometimes a mild fever (less than 101°F). It's not uncommon for someone to feel yucky for up to a week after, especially if they have been throwing up a lot and haven't been able to drink water. As with any illness that causes diarrhea and vomiting, the biggest risk is dehydration.

E.coli infections become dangerous when someone who has fallen ill is not able to replenish the fluids they have lost from being sick. This can be especially challenging with small children who may refuse a drink or popsicle because they don't understand that they need to stay hydrated (they just don't want to be sick again).

That's why, if a child isn't peeing, has a pale and swollen appearance in their face and limbs, and has other symptoms like bleeding gums that are not usually associated with a simple stomach flu, they need to receive medical attention right away. These symptoms may mean that their kidneys aren't working properly.

Even if a child does not develop hemolytic uremic syndrome, they can still easily become seriously dehydrated and may require a trip to the hospital for intravenous fluids.

The Centers for Disease Control (CDC) advises that if you have any of the products listed in the recall you dispose of them right away. They also advised that if you're planning to make cookies with your kids this summer, maybe don't let them play with the raw dough.

For the most part, flour is safe because it gets cooked and any pathogens that might be living in it are killed by the heat — but raw dough, either for cookies, cake or pizza, may still have nasty bacteria lurking on it.

“Kids are going to handle it and touch their faces, and they’re going to lick their fingers; explained Jenny Scott, senior adviser in the FDA’s Center for Food Safety and Applied Nutrition in an article for The New York Times, "It’s hard to supervise that.”

General Mills has posted a full list of the products recalled; if any of them are in your kitchen, toss them out. When it comes to E.coli, it's better to be safe than sorry.