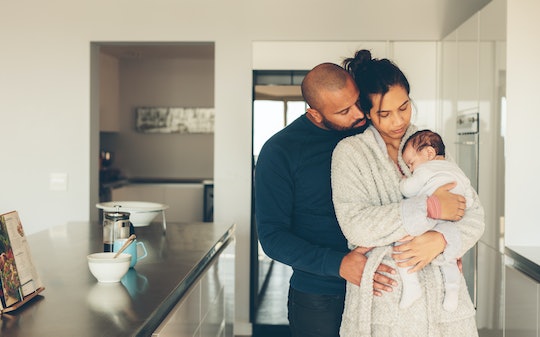 Being a parent in the work-force can be real difficult, especially given how much of a gamble paid parental leave in the United States can be. Some companies, however, are stepping it up to provide better options. General Mills' new parental leave policy sets the company apart from most others, providing some real sweet benefits.

Let's be frank: the United States just isn't measuring up when it comes to providing parental leave. The United States is one of only four countries that has no federally mandated policy to give new parents time off, according to Business Insider. Most women in the United States rely on the Family and Medical Leave Act, which is a federal law that protects your job for up to 12 weeks after childbirth or adoption. However, as The Cut outlined, FMLA doesn't require that you get paid during that time off. Instead, your job just needs to be waiting for you when you return, without penalty.

For most families, that's really unreasonable and can make life, especially with a new baby, all the more difficult. Having 12 weeks off is nice, but unpaid? Even for two-parent households, surviving off one income can be a challenge.

But General Mills introduced a new policy that should set an example for other companies to follow suit.

General Mills' new policy will, according to local CBS News affiliate WCCO, "increase time off for new birth mothers to 18-20 weeks of maternity leave with 100 percent pay," starting on Jan. 1 of next year. Additionally, as WCCO reported, "Parental leave for fathers, partners and adoptive parents will be increased to 12 weeks of paid time."

Some people might pause and think five months is an excessive amount of time or wonder why they even bother with paternal leave. However, increasing both the length of paid leave and who gets access to it is really important.

To start, increasing paid maternal leave means that more mothers, particularly women of color and/or those who are low-income, will be able to spend time with their babies. This can actually lead to a decrease in infant mortality, according to Reuters. A study in the journal PLoS Medicine found that, for every additional month of maternity leave, there was an associated 13 percent reduction in infant mortality, as Reuters reported.

The study didn't outline why the correlation exists. However, not all parents can afford to leave their infants with child care professionals. That means some may have to leave their babies with friends or family, who may not be familiar with infant needs, as Slate reported.

Paternal leave allows fathers to bond with their babies at home, too. Often, our society sees raising babies as a mother's responsibility, which can be really stressful and unfair. As Forbes pointed out, allowing fathers, and partners in general, to access paid leave means that real change can be made in how our society perceives caregiving.

Having children is a life-changing and beautiful time in someone's life, but raising them is a lot of work. And parents especially need this time precious time with their newborns. General Mills' new policy is truly impressive and, hopefully, more companies will follow their lead.