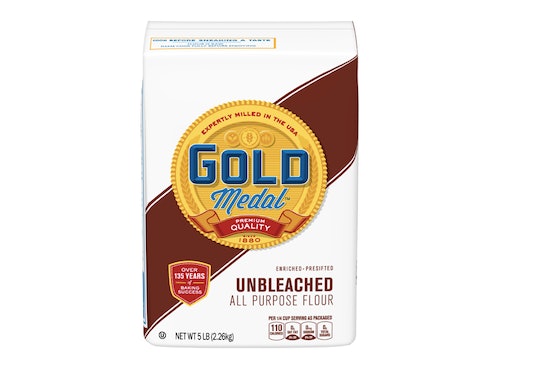 If you've got a bag flour stashed up in your cupboards, you're going to want have a close look at your supply. This week, General Mills recalled bags of flour due to salmonella concerns, and you may be in possession of the affected products and here's everything you need to know about the recall.

On Wednesday morning, General Mills announced a recall of its 5-lb. bags of Gold Medal unbleached flour due to concerns of salmonella contamination, as People reported. The bags included in the recall have a best-if-used-by date of April 20, 2020. All other sizes and sell-by dates of bags of Golden Medal flour are not included in the recall. General Mills is urging anyone with the recalled flour to dispose of it.

But prior to disposal, retain the product name, UPC (bar code) and Better if Used By Date in order to help the General Mills Consumer Relations team provide you with a replacement coupon. If you have dumped your flour into a canister or other container without the flour package, or have any doubts about your flour, throw it away to be on the safe side.

For additional information, fill out a General Mills inquiry form of contact the company's Consumer Relations team at 1-800-230-8103.

Romper's request for further comment from General Mills regarding the recall was not immediately returned.

While the company "has not received any direct consumer reports of confirmed illnesses related to this product,” it has chosen to issue the recall “out of an abundance of care,” as USA Today reported. The salmonella bacteria causes nausea, vomiting, fever, diarrhea, and abdominal pain, as well as potentially life-threatening infections when it gets into your bloodstream. Salmonella is particularly dangerous to infants and young children, according to the Centers for Disease Control and Prevention.

In reference to the recall, Jim Murphy, President of General Mills Meals and Baking Division, explained in a statement that consumers should be aware that flour is not a product to be consumed raw, according to CNN:

Food safety is our top priority, and though we have not had any confirmed illnesses, we are voluntarily recalling this specific lot of Gold Medal unbleached flour to prevent potential illnesses. We are continuing to educate consumers that flour is not a ‘ready to eat’ ingredient. Anything you make with flour must be cooked or baked before eating.

And, yes, the whole "everything must be cooked or baked" thing does include cookie dough. As explained on the General Mills website, the wheat used to make flour is grown outdoor in the presence of various bacteria. And the milling process does not generally include treatments to kill bacteria. For that reason, you should never eat or taste dough or batter made with raw flour. But, a little bird told me that toasting the flour before mixing ingredients makes edible raw cookie dough. Score!

According to the Food and Drug Administration (FDA) and the CDC, the bacteria that causes salmonella is killed when you bake, fry, sauté or boil products made with flour. Even if your flour isn't included in the recall, General Mills encourages you to refrain from consuming any raw products made with flour, and to properly clean surfaces, hands, and utensils after contact with flour or dough. So I guess that means no more licking the brownie batter spoon — don't shoot the messenger, please.

All jokes — and sugary goodness — aside, salmonella is no laughing matter. In fact, it is estimated to cause around 1.2 million illnesses, 450 deaths, and 23,000 hospitalizations in the United States each year, according to reports released by the CDC.

So, check your pantries and put down the wad of cookie dough that you were about to shove into your mouth. OK, maybe that last bit was for me, but you get the picture.