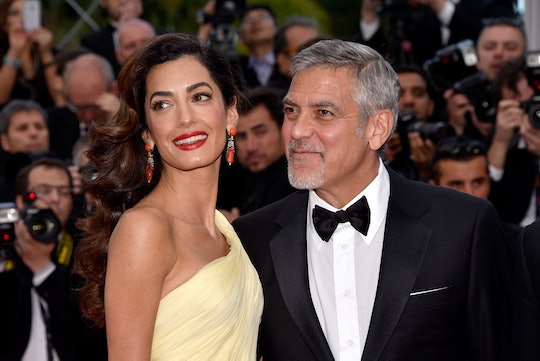 For most travelers, the absolute last thing they want to see when boarding a plane is a baby. Even if you're a fellow parent, being cooped up in a metal tube with somebody else's crying infant can grate your nerves. But we should all be so lucky to get on the same flight as George and Amal Clooney's babies, whose air travel contingency plan goes above and beyond what even the most considerate parents usually do. Sources told Us Weekly that when the actor and barrister took 6-month-old twins Alexander and Ella on a recent flight to England, they hooked up all the first-class passengers with noise-canceling headphones and a personal note apologizing for any disruption their kids might cause.

In recent years, it's become a growing trend for parents flying with babies to gift their fellow travelers with goody bags containing apology notes, candy, earplugs, and the like, but the Clooney family has put them all to shame. The custom headphones bore the Casamigos tequila logo (Clooney's company that recently sold for $ 1 billion), and Quentin Tarantino was reportedly among those who received a pair. But it turns out they weren't even necessary, as the babies stayed quiet throughout the flight. They're sure to come in handy on future trips, at least, and that note is a pretty sweet souvenir that those passengers will undoubtedly be showing off for years to come.

Clooney is turning out to be an even cooler dad than fans could have anticipated; he recently told the Sydney Morning Herald that he has a newfound appreciation for the complicated art of diapering, a duty he'd never dream of passing off to hired help. "It's my job," he said when asked why he didn't have a nanny to take care of that. "What's the point of being a parent if you don't get your hands dirty? That's what it's all about." In a perfect world, we wouldn't feel the need to congratulate a parent for, um, parenting, but he's a dude, and he's also rich and famous, so it's actually kind of remarkable.

And passing out free headphones wasn't the only story of Clooney's thoughtfulness and generosity this week; his friend and business partner Rande Gerber recently revealed on MSNBC's Headliners that back in 2013, Clooney invited his 14 closest friends over for dinner and presented them each with a suitcase containing $1 million cash, and he even thought to cover the taxes for the gifts. Some of these friends were struggling to make ends meet at the time, Gerber said, and Clooney told the group, "I know we've all been through some hard times, some of you are still going through it. You don't have to worry about your kids, you don't have to worry about, you know, school, you don’t have to worry about paying your mortgage."

Of course, most parents don't have the means to hook up the whole plane with fancy gifts when they're traveling with a new baby, and although it's becoming more popular to make such gestures, it's really not necessary. According to to the American Academy of Pediatrics, babies often cry on planes because they're suffering from discomfort in their eardrums caused by changing air pressure in the cabin. Adults can yawn or chew gum to relieve the problem, but babies, who are more susceptible to the sensation, obviously can't. If you're concerned about your baby's reaction to cabin pressure, offer a bottle, breast, or pacifier during takeoff and initial descent, when the pressure changes are the greatest. This can help not only to relieve the pressure in their ears, but provide emotional comfort as well. Or, ya know, just make it rain expensive gifts all over the plane. Either way.