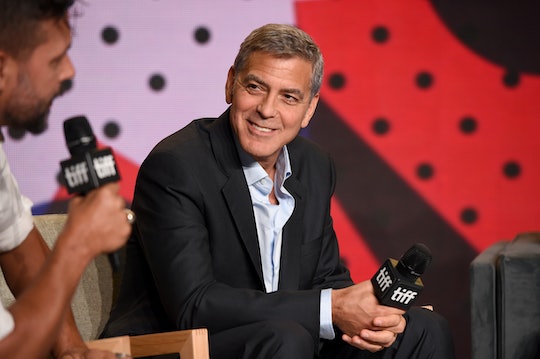 George Clooney has been no stranger to commentary through these heated political times. And with the controversial National Anthem protests by NFL players, managers, and owners, could you really expect him not to pipe up with his two cents? Fans will be excited to know that George Clooney wrote a poem about the take-a-knee protests — and it's golden.

In response to the controversy surrounding players kneeling (or sitting, or outright skipping) the National Anthem before kickoff, the actor/director/activist has penned a poem for The Daily Beast. You're probably dying to read it by now, so here's Clooney's touching poem in its entirety, according to The Daily Beast. (Take note of that last line!)

I pray for my country.

I pray that we can find more that unites us than divides us.

I pray that our nation’s leaders want to do the same.

I pray that young children like Tamir Rice can feel safe in their own neighborhood.

I pray for all of our children.

I pray for our police and our first responders.

I pray for our men and women of the armed services.

I pray that dissent will always be protected in this great country.

I pray for a more perfect union.

And when I pray, I kneel.

In the third line, Clooney is likely hinting at President Trump's speech in Huntsville, Alabama, Friday night, where he spoke at a rally for Sen. Luther Strange. In this heated speech, he called for those in attendance at NFL games to walk out of the stadium if they see a player taking knee during the National Anthem. It's obvious that Trump was referring to San Francisco 49ers quarterback Colin Kaepernick. He said, according to TIME:

Clearly, Clooney is expressing his support for the constitutional rights of all American citizens to gather together in peaceful protest. And judging by the united acts of protest that took place in football arenas across the nation this past weekend, he's not alone.

Here's the thing: I grew up in Kentucky. I sold insurance door-to-door. I sold ladies' shoes. I worked at an all-night liquor store. I would buy suits that were too big and too long and cut the bottom of the pants off to make ties so I'd have a tie to go on job interviews. I grew up understanding what it was like to not have health insurance for eight years. So this idea that I'm somehow the 'Hollywood elite' and this guy who takes a s--t in a gold toilet is somehow the man of the people is laughable.

(Seems pretty reasonable to me; Trump is many things, but a man of the people isn't one of them.)

Clooney's continued outspoken disdain for the president — not to mention the actor's charm and general likability — have led many to wonder if he would consider running for office one day. To that idea, he cheekily told the Daily Beast:

I have to say, I agree. And Clooney 2020 sounds like a fantastic idea to me.