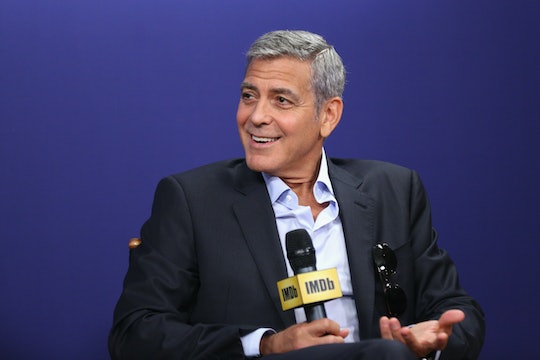 For decades, the public considered George Clooney to be an eternal bachelor. No wife, no kids, nothing to to but have fun all the time. Some fans might have attributed the actor's trademark wit and charm to his carefree lifestyle, but George Clooney's best dad quotes show that fatherhood hasn't changed him one bit. Whether he's discussing fatherhood, show business, or politics, his sense of humor hasn't suffered just because he has a couple of kids at home now. Apparently, corniness, bad puns, and a complete lack of self-awareness aren't inherent to dads, after all.

Clooney has long been known as a prankster; the Telegraph has chronicled some of his greatest hits, like the time he pooped in Richard Kind's litter box, or when he filled producer Jerry Weintraub's underwear with M&Ms after tricking him into drinking enough to pass out, and that one time he subjected Pat Boone to an unsolicited d*ck pic, complete with a cigarette and sunglasses for comedic effect. Even when starring in a movie about racism (the Coen borthers' Suburbicon, out next month), Clooney is still "voilently funny, according to Maxim. Parenthood hasn't slowed him down that much, it seems, and not only has he kept his sense of humor, family life has revealed that he's also super sweet on top of that. For example:

Much ado was made about Clooney's recent admission that he gets up at night with his twins, Alexander and Ella, who are three months old. But he knows who's doing the real heavy lifting. "I’ve never been a big sleeper, but now [Amal and I are] doing it in shifts," he told Vanity Fair. "I feel really guilty because my wife has to get up literally every two hours." If you're a new mom or you're expecting, show this to your spouse right now. It's all about the shifts!

When Extra's Jerry Penacoli recently teased Clooney about how he used to say he'd never have kids, the actor quipped, "Yes, well, it's happened. Can’t take it back now." Just imagine how many times a day some smart aleck points that out to him. What's he supposed to do, surrender the babies?

"It doesn't fundamentally change you"

"This is an all-new adventure for me, but I've been through it with all my friends, so it's not really that much of a surprise," Clooney told Entertainment Tonight. "[Fatherhood] has made me much older. It doesn't fundamentally change you, but I'm excited to see who these two people are going to be in life. I'm very proud to be [a dad]. I feel honored to be a part of it." If you didn't realize how fast parenthood ages a person, go find a picture of from your parents' wedding, and compare it to one from your first birthday. Then call them up and apologize.

Clooney recently told the Associated Press that getting ready for red carpet premieres is only slightly different for him these days: "I just have to clean the barf off of my tux. It used to be my barf, but now it's the twins' barf. So it all works out."

"I played a pediatrician on ER."

When E! News asked if Clooney was prepared for his kids, he joked, "Hang on for a minute. I played a pediatrician on ER. So I know how to work on extra children... If there's any accidents I'm there. I'm the guy."

"You know, everything is conceptual until it's real. It's like, 'Yeah, we're going to be parents, yeah.' And all of a sudden you go: 'Holy sh*t. I'm a parent!'" Clooney told The Hollywood Reporter. "The first thing you think is, 'I hope I don’t screw this up.' I mean, look, we are all responsible for things in life, and Amal and I are responsible for each other in a way — we look out for one another and we care about one another. But you are really responsible for two kids."

It's jarring, but true. But it looks like for all his lack of planning, Clooney is totally nailing this whole dad thing, as well as being a really supportive co-parent to his wife, Amal. Who knew he had it in him?