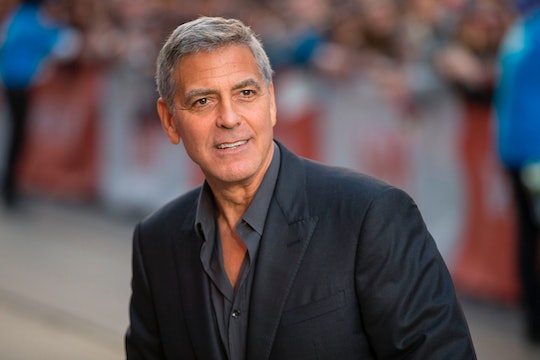 Another day, another report of sexual harassment complaints swept under the rug by executives in order to preserve a famous man's career. In the last week, dozens of complaints against Hollywood producer Harvey Weinstein have come to light, leading to a media maelstrom and his eventual dismissal from the Weinstein Company. News like this can often leave big names in Hollywood surprisingly silent — but in this instance, since the news broke, several celebrities have started speaking up. Among others, actor George Clooney's Harvey Weinstein statement is well worth reading.

Clooney's first big break actually happened thanks to Weinstein in 1996, when he was cast in Weinstein's film From Dusk Till Dawn. But speaking to The Daily Beast on Monday, Clooney said he had been entirely unaware of the allegations against Weinstein.

Harvey’s admitted to it, and it’s indefensible. I’ve known Harvey for 20 years. ... We’ve had dinners, we’ve been on location together, we’ve had arguments. But I can tell you that I’ve never seen any of this behavior — ever.

Harvey's representatives had no comment for Romper when contacted. Harvey's attorney, Charles Harder, is reportedly in the process of filing a lawsuit with The New York Times for its reporting on harassment claims against Weinstein. However, in a statement to the newspaper, Harvey said: "I appreciate the way I’ve behaved with colleagues in the past has caused a lot of pain, and I sincerely apologize for it."

Speaking to The Daily Beast, Clooney admitted that the problem was far more insidious than several accusations against one big-name producer. "This is harassment on a very high level," he said. He continued:

There’s an argument that everyone is complicit in it. I suppose the argument would be that it’s not just about Hollywood, but about all of us — that every time you see someone using their power and influence to take advantage of someone without power and influence and you don’t speak up, you’re complicit. And there’s no question about that.

It's not that people were looking the other way when it came to these accusations, Clooney said — it was just that no one paid attention at all, because "a lecherous guy with money picking up younger girls" is simply normalized in today's society.

With his harsh words about Weinstein and his views on Hollywood and society's complicity, he joined several other celebrities who have spoken out about the allegations.

Other celebrities who had collaborated with Weinstein, such as actor Jennifer Lawrence, spoke out about the allegations to media outlets. "I was deeply disturbed to hear the news about Harvey Weinstein’s behavior," Lawrence told People on Tuesday. "This kind of abuse is inexcusable and absolutely upsetting. My heart goes out to all of the women affected by these gross actions."

The news took a good many celebrities by surprise, especially those whose careers had been helped by Weinstein over the years. Many have received criticism from the public, with critics claiming that they had to have known, but remained quiet due to the career-boosting benefits they gleaned from their relationship with Weinstein.

However, as Clooney told the Daily Beast, an older man in power hitting on younger girls usually isn't news. And as many women who have experienced abuse or harassment can tell you, the inappropriate flirtation that happens in public, at dinner tables, is seen as ridiculously normal in society — and the inexcusable harassment that occurs on a regular basis often takes place in private, where women have to question whether they want to lose their career over an allegation that's dismissed.

Hopefully, however, that's about to change — and people in power will realize that this kind of abuse will lead to them being "outed publicly, shamed, and even prosecuted," as Clooney so aptly put it.