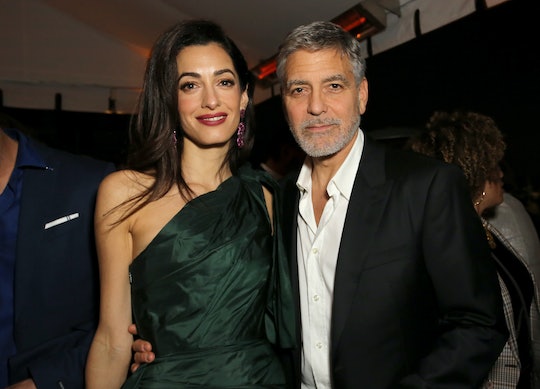 Today in news that we wholly expected and yet somehow are still just as amazed to learn, it turns out that George Clooney's twins are already bilingual, and are apparently picking up on their mom Amal Clooney's accent. It's pretty much par-for-the-course being the spawn of being two incredibly successful people, but hey, it's still an accomplishment nonetheless.

In an interview with Ellen DeGeneres, Clooney opened up about his latest film roles, and his greatest role as dad of 2-year-old twins. "Do they have accents?" DeGeneres inquires, given that the Clooneys live in Italy, the U.K., and in the U.S. "The other day I caught my son, because my wife is very, very English... my son said, 'Zebra,'" pronounced as "szebra."

"They obviously got my wife's brains," he says, sharing that they are not quite 2 years old yet, and they can already count to 10 in both English and Italian. "I'm still trying to learn the English part," he jokes. "They are super smart then," DeGeneres commented. "That's scary. It's easier when they're dumb," to which Clooney laughed.

He also briefly lamented the stressors of having two very young kids at the same age, namely that they are now mobile and able to run in different directions. "Tether them together, that way when they run too far, they just snap back," DeGeneres suggested. (Always with the jokes, Ellen.) 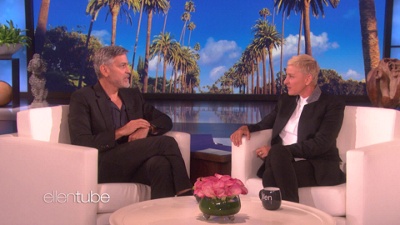 It seems that the Clooney twins are doing well in no small part due to some pretty great parenting.

In an interview with Vogue that was published in the spring of last year, when the babies were a lot younger, Amal opened up about how she balances motherhood with her very ambitious career as a humanitarian rights advocate, criminal defense lawyer and activist.

She said then that "quality time" had to take precedence in her morning routine. “Between six and eight in the morning we get to have them in our bed — I don’t schedule any calls before eight,” she told Vogue. “When I was nursing, it was much more complicated, because there are two. I had all manner of weird cushions and pillows and machines.”

The year prior, George opened up to The Hollywood Reporter about how though he was once hesitant if not entirely closed to parenthood, now that he has his twins, Alexander and Ella, nothing could "feel more natural" for the couple.

"It had never been part of my DNA," he said at the time. "We didn't plan on it. We never talked about it until after we were married, which is funny. There was an assumption that we didn't want them. And then, after the wedding, Amal and I were talking and we just felt we'd gotten very lucky, both of us, and we should share whatever good luck we've got. It would seem self-centered to just have that belong to us."

He later told TODAY that he's really leaned into being a dad, and that the twins are already pulling pranks on him. "They're happy kids. They laugh a lot. They do pranks already," he said. "They put peanut butter on their shoes, so that it looks like poo-poo on their shoes and stuff. They think that's funny."

Jokes aside, it's clear that the Clooney kids are already embarking on their parents' well-known legacy of humor, intelligence, and yes, being multi-lingual.