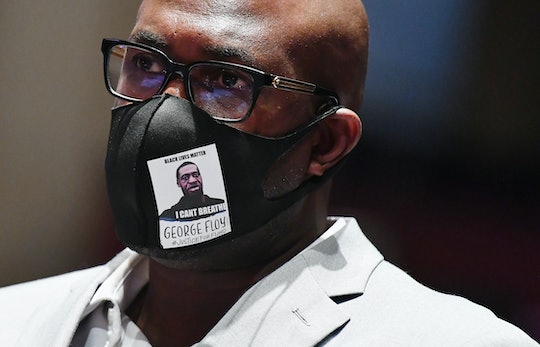 In the wake of his brother's death in police custody, George Floyd's younger brother Philonise Floyd delivered a heartbreaking testimony to Congress, imploring lawmakers to "stop" his family's pain and pass legislation on police reform.

Roughly two weeks after his 46-year-old brother died after a police officer knelt on his neck for nearly nine minutes, Philonise Floyd appeared in front of the House Judiciary Committee on Wednesday as a key witness for their hearing on police and misconduct.

"The world knows him as George, but I called him Perry," Philonise said in front of Congress. "Yesterday we laid him to rest. It was the hardest thing I ever had to do. I'm the big brother now. So it's my job to comfort my brothers and sisters, Perry's kids, and everyone who loved him. And that's a lot of people. I have to be the strong one now, because George is gone."

Philonise said he doesn't want George's death to be in vain. "I'm tired," he said. "I'm tired of pain, the pain you feel when you watch something like that. I'm here today to ask you to make it stop. Stop the pain. Stop us from being tired."

House Democrats are currently working on a police reform bill, the Justice in Policing Act, which would prohibit federal, state, and local law enforcement from racial, religious, and discriminatory profiling and mandate trainings. The act would also ban chokeholds, like the one used on Floyd, carotid holds, and no-knock warrants, a type of warrant used by police who shot Breonna Taylor, at the federal level. If passed, the act would limit military equipment used by police forces, require body cameras, investigate police misconduct, and work to hold police accountable.

In his testimony, Philonise said his brother didn't deserve to die when police were called after he allegedly used a counterfeit bill to buy cigarettes at a convenience store on Memorial Day. "I am asking you, is that what a Black man is worth? $20? This is 2020. Enough is enough," he said. "The people marching in the streets are telling you that this is enough. By the leaders — that our country, the world needs the right thing. The people elected you to speak for them, to make positive change. George's name means something. You have the opportunity here today to make your names mean something, too."

The House Judiciary Committee is expected to advance the Justice in Policing Act next week, according to The Hill, and a vote on the House floor will happen on June 25. Philonise called on the committee members in his testimony to pass the act. "If his death ends up changing the world, which I think it will, then he died as he lived," he said. "It is on you to make sure his death is not in vain."