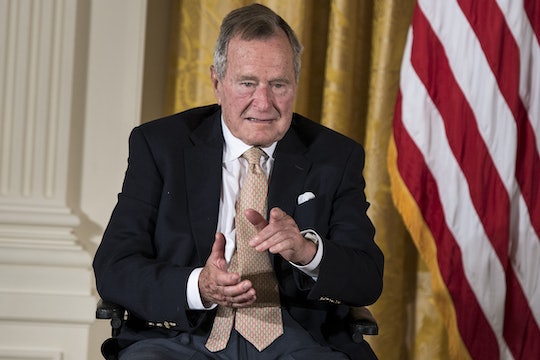 On Wednesday, spokespeople for President George H.W. Bush revealed that the 92-year-old has been hospitalized in Houston, Texas since Saturday. After leaving public office in 1993, Bush returned to Texas, where he built millions working for the oil industry before seeking public office. George H.W. Bush's net worth reveals that even though his early years as a Texas oil magnate gave him a solid financial foundation, his humanitarian work through public service during his years in Congress and as president reflect a very different set of priorities later in his life.

Bush's net worth, according to the website The Richest, is approximately $25 million, up from a net worth of $23 million as reported by Time in 2015. Though his Texan-twanged son George W. perhaps painted a picture of a family who had deep roots in the South, the Bush family actually had their roots in Massachusetts, where Bush Sr. was born and went to school. After enlisting in the U.S. Navy following the attack on Pearl Harbor, Bush married Barbara Pierce; the pair just celebrated their 72nd wedding anniversary earlier this month and are the longest married couple in presidential history. It was't until graduating from Yale University that Bush moved his family down to West Texas, where he would become a millionaire by the time he was 40 years old.

Bush's foray into the booming oil industry of Texas would only last about 16 years, when the business mogul began his Congressional career in the U.S. House of Representatives in 1966. The next nearly 30 years of his life were spent in a rising political career, moving from the House to then chairing the Republican National Committee. Bush served as the director of Central Intelligence under President Gerald Ford before his own two turns in the White House: First, as vice president alongside Ronald Reagan, and then in 1989 when Bush was elected the 41st President of the United States himself.

Bush lost reelection to a young governor from Arkansas — Bill Clinton — but that didn't stop his ongoing humanitarian and philanthropic work once he left office. While president, Bush founded Points of Light — named for his historic "thousand points of light" message during his presidential inauguration speech in 1989. Bush still serves as Honorary Chairman of Points of Light, an organization committed to fostering volunteerism among America's youth.

On Wednesday, representatives confirmed that Bush Sr. was hospitalized in Houston for "shortness of breath," out of precaution. Bush suffers from a form of Parkinson's disease that requires him to be in a wheelchair. Speaking to The Houston Chronicle, Bush's chief of staff Jean Becker said that Bush is "fine and he's doing really well."