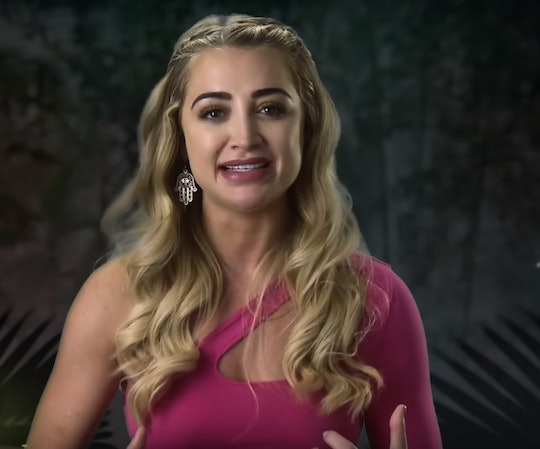 Whatever You Do Do Not Sleep On Georgia On 'The Challenge'

Georgia was the breakout competitor of The Challenge: War of the Worlds. She went into the season as a rookie and made it all the way to the finals with no similar experience prior to the show. She was asked back for War of the Worlds 2 and she is already proving herself a worthy competitor yet again. And after Georgia won the second elimination on The Challenge, she basically cemented her spot in the finals this time around too. Because of the way she is already playing, Georgia could win the season. It’s still early to say for sure who will come out on top or if the teams will eventually split apart or not, but Georgia is well on her way already.

This season, players get a bum deal with the Proving Ground elimination round each episode. The losing team not only has to be at the mercy of the tribunal from the winning team, but they also have to choose one of their own to put up in the elimination competition. On Wednesday's episode, Georgia and Big T, who are both from the UK team, were forced to go against each other in a Proving Ground challenge that seemed hard enough to have been saved for a later elimination round.

The entire competition lasted almost two hours and required Big T and Georgia to try and push a dumpster to the other side of the ring and light their flame. In the end, Georgia won, but it was a grueling competition and it helped Georgia prove herself once again as a strong UK competitor.

It still might be a long season ahead for Georgia. While the UK team has some returning players, there are more rookies in it than the US team and right now, it looks like the UK team members are being picked off one by one. When Georgia had the chance to switch teams, she remained loyal to the UK team, so she might be the player to carry the female side of the UK team for the majority of this season.

That being said, there are still some fierce competitors on the US team, like Bananas, Laurel, and Cara Maria. They have all been in the thick of The Challenge more times than Georgia has and they could have the experience it takes to best her in future challenges, even if she won an epic elimination in Episode 2.

Last season, Georgia surprised a lot of her fellow competitors by showing her true colors as a beast during the most important competitions, including the final challenge, during which she almost passed out in the desert from exhaustion. However, Nany called Georgia a "fun time" when MTV producers asked her for her first impression of the then-rookie.

Bananas didn't take her seriously as a strong competitor either and said, "When Georgia first pops out, I was like, 'I didn't know Hannah Montana was doing The Challenge these days.'" Zach had a similar first impression of Georgia and, at the time, called her a Spice Girl and predicted that she wouldn't be athletic enough to compete with the rest of The Challenge cast members.

She proved them all wrong and this season, Georgia has already shown other players who might know her yet that she is in this to win it, even if he has to carry her team some of the way. As long as she continues the season with the same determination she showed in the second Challenge elimination, Georgia has a good chance of winning.