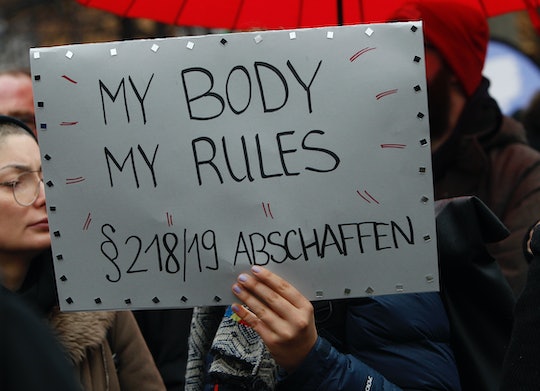 Is it just me, or is the U.S. seriously regressing as a nation? Measles outbreaks are popping up across the country because parents are deliberately not vaccinating their children. Environmentally-friendly legislation is being rolled back at an alarming rate. Increasingly, white, male lawmakers are attempting to take away a woman's right to choose. It's a deeply troubling thing to witness over and over again. Unfortunately, yet another state passed and signed into law a bill that aims to criminalize the constitutional right to a safe abortion. And honestly, Georgia's restrictive abortion law is a dangerous attack on women's reproductive rights.

Let's dig right in, shall we? As with an increasing number of states within the past decade, Georgia has managed to pass new legislation that essentially outlaws abortion. Georgia Republican Gov. Brian Kemp signed HB 181 into law on Tuesday, May 7, Slate reported. It's yet another "heartbeat" bill, meaning abortion after the point that a fetal heartbeat can be detected — which is typically around 6 weeks and before many women even know they're pregnant — is against the law. Except, the new Georgia law takes it about a million steps further. That's because both women and their doctors could face life in prison or the death penalty in the event of illegal abortions, according to CNN.

I'm going to just let that sink in for a moment.

In Georgia, it will soon be illegal — and punishable by life in prison/the death penalty — to obtain an abortion of any kind if a heartbeat can be detected. Many women don't even find out they're pregnant before six weeks. So essentially, the decision has already been made for them. What. The. Actual. F*ck.

The good news is the new law doesn't go into effect until Jan. 1, 2020, according to CNN. So technically, women in Georgia are still allowed to obtain abortion up to their 20th week of pregnancy.

In the meantime, the American Civil Liberties Union has already said it will challenge the new abortion law in court, according to Slate. "Abortion is a RIGHT. We're suing Georgia because the only person who should have the power to decide whether you need an abortion is you," the ACLU tweeted on Tuesday. "Our reproductive rights are under attack. With your help, we're ready to fight back every step of the way."

The Center for Reproductive Rights has also vowed to challenge the law. (Because, you know, there's this little thing called Roe v. Wade that guarantees a woman's legal right to choose.) "This law is bafflingly unconstitutional," Elisabeth Smith, chief counsel at the Center for Reproductive Rights, told CBS News. "Bans like this have always been blocked by courts. We will be suing Georgia to make sure this law has the same fate." Smith is right, you know. In January, for example, a judge struck down a heartbeat bill passed in Iowa, declaring it unconstitutional. Similar situations have played out in North Dakota, Arkansas, and Mississippi.

Gov. Kemp, himself, even acknowledged the new Georgia law wouldn't hold up in court. "(The bill) is very simple but also very powerful: a declaration that all life has value, that all life matters, and that all life is worthy of protection," Kemp, said Tuesday, according to CNN. "I realize that some may challenge it in a court of law. But our job is to do what is right, not what is easy. We are called to be strong and courageous, and we will not back down. We will always continue to fight for life."

All I can say is hopefully the courts continue to follow precedent on this and strike down Georgia's restrictive abortion law. Access to a safe abortion must remain a fundamental right. Because ending a pregnancy is a deeply personal decision that should be between a woman and her doctor. Period.