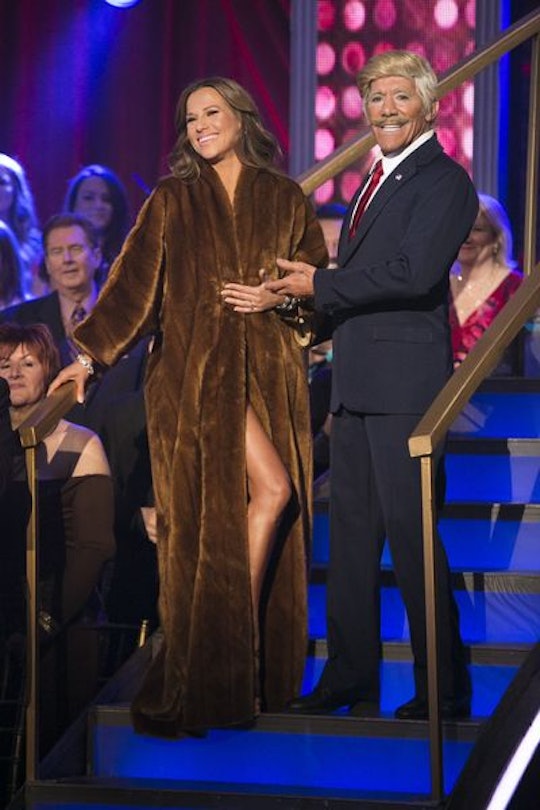 Geraldo Rivera Does A Donald Trump Inspired Dance On 'Dancing With The Stars,' & It Was Huge

One of the biggest news topics nowadays is Donald Trump. He's everywhere, including Dancing with the Stars. When Week 2 began, and Geraldo Rivera came out on stage in a Trump wig, it was apparent where this week was going. But, instead of making fun of The Donald, Rivera actually did a parody in honor of his friend of over 40 years. The Geraldo Rivera Dancing with the Stars Trump dance, unfortunately, had a lot of glitz and glam but little substance. As Len said, it was the definition of "trumpery."

According to Rivera, he and Trump have been friends since 1974. That's 42 years if you're counting. Rivera said in the package preceding his dance that Trump is "a friend of mine," and that he thought the presidential candidate would get "a kick" out of the number. Well, at least someone will because overall the dance was a flop. A failure. A loser. Whatever other diss Donald Trump comes up with on his Twitter account.

The dance itself started with Rivera in the "White House," but it quickly picked up speed and adapted the theme of the night — Latin — and became tropical and fun. It wasn't good, but it was fun to watch.

Carrie Ann Inaba said that the dance didn't make history, but it did make her laugh. She also noted there was a bit of improvement on Rivera's part. Bruno was not sure of the content of the dance. But it was Len who had the best comment of the night, stating that the dance was trumpery. If you don't know what that means, no problem, I looked it up and I am pleased to inform that the definition of "trumpery" is literally "worthless nonsense." Pretty amazing, if I do say so myself.