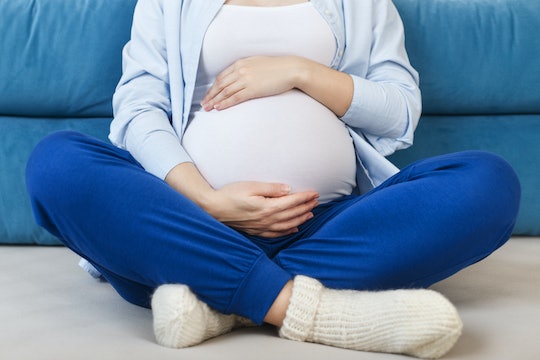 Postpartum depression in new moms is still very much a taboo topic, but some researchers are doing their best to begin understanding more about it. Sometimes, postpartum depression is thought of as an illness that strikes at complete random, but new research is suggesting there may be some indication as to what may cause it. In fact, according to a recent study, gestational diabetes may increase moms' risk of postpartum depression.

Postpartum depression can be taboo to speak about, due to how negatively our society typically responds to mental illness. Because of that, it can seem like a big, almost invincible monster to new moms. Part of that is definitely brought on by people not completely understanding what postpartum depression is or what causes it.

It can be caused by hormones, stress levels, or if you have a previous history of depression, according to the Mayo Clinic. And now, doctors are finding that its symptoms may appear for other reasons, too.

For the new study — conducted by the University of Eastern Finland, the University of Helsinki, Kuopio University Hospital, and the Finnish National Institute for Health and Welfare — researchers pooled data from the Kuopio Birth Cohort, according to Medical Xpress. A total of 1,066 mothers with no previous mental health issues were selected for the study, as Medical Xpress reported.

GDM refers to any degree of glucose intolerance with onset or first recognition during pregnancy, according to the American Diabetes Association. The association also reported that approximately 7 percent of all pregnancies are complicated by GDM, which results in more than 200,000 cases annually. But, what links GDM and postpartum symptoms?

Psychological mechanisms may partially explain the observed association between GDM and postpartum depression symptoms. Being diagnosed during pregnancy with a disease that might harm the fetus can be a stressful experience, which may predispose to depression symptoms.

This makes sense, if you remember that the Mayo Clinic recognized stress as a possible cause of postpartum depression. In addition to stress, Dr. Soili Lehto, Group leader of Kuopio Birth Cohort's mental well-being section, explained that physiological mechanisms may be at play. "...physiological mechanisms may also contribute to this association," Lehto explained, according to Medical Xpress, adding: "Impaired glucose metabolism may increase cytokine mediated low-grade inflammation, which has also been associated with depression. Previous studies have also shown that type 2 diabetes predisposes to depression, and depression to type 2 diabetes."

More studies need to be completed to fully understand the link, but researchers are on to a good start.

Part of what has made postpartum frightening for so long is people not knowing what causes it. But research that dives into understanding postpartum symptoms and their relationship to other medical conditions may help doctors be able to pinpoint patients early on who might benefit from more information up front.